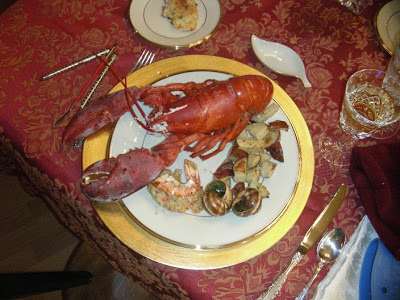 I realize I am the GrillinFool and this is a grilling website, but for NYE we did not grill anything. I did not pay for the lobsters and the man that did wanted them boiled. As I was eating my lobster for free, I obliged the man with the credit card. As someone who is cursed with an insatiable passion for seafood and stuck smack dab in the middle of the country I can’t stress enough how much I enjoyed this meal. And yes, I was very worried I would screw up the cooking of the lobsters in my first attempt at this. It is so easy to do. I worried for nothing. Click the link below and see what I am talking about…

My menu planned on being lobsters, crab stuffed prawns, sauteed swiss chard, roasted red potatoes, cheesy potato biscuits, and clarified butter. As you can see in the pic above there is no greenery on the plate. The swiss chard at my grocery store was downright rotten. They had very little left and what was left was pretty much not edible. The good news is though that they did have escargot ready for the oven with a butter/garlic/herb mixture already added to the shells. The crab stuff prawns were also pre-made at the grocery store. Remember I was going for low maintenance for this meal.

This was the first time I have ever made lobsters myself. And I ran into a little problem. My largest pot is a 12 quart pot. That is not big enough for these beauties: 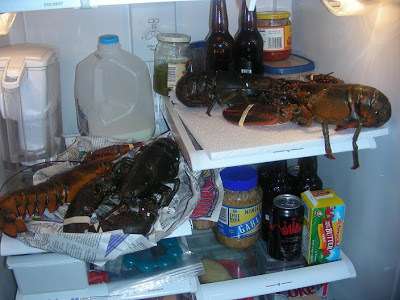 I want to expound a bit about the lobsters we had. Being in St. Louis, lobster is not on the menu very often except for very special occasions as it is normally extremely expensive. Well, we found TheLobsterGuy.com and these lobsters turned out to be pretty reasonable and more than that they were phenomenal. The lobsters were billed as being 1.5 pounds and they were every bit of that if not more. We ordered them on December 28th for December 31st delivery. They came with instructions on how to care for the lobsters up until cook time as well as a hand written note thanking us for our order. I don’t pimp a lot of products here but this outfit deserves the props. Highly recommended. Now back to the meal itself.

Knowing that I didn’t have the hardware to handle these bad boys I went to a local wholesale restaurant supply store and picked up this 60 quart monster (my 20 pound beagle in the background for perspective): 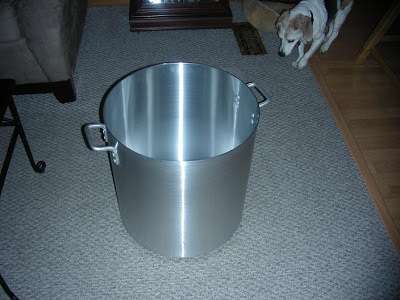 This problem was a little bigger than the lack of greenery for the meal. While this pot would easily accommodate the four lobsters my stove could not accommodate the 15 gallon pot: 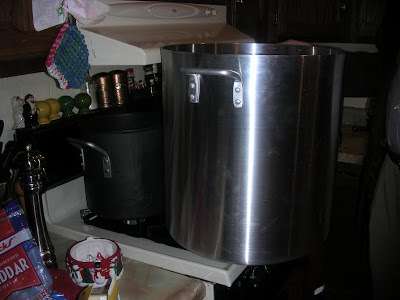 Missed it by about an inch and a half. While I was not happy about the situation, my eight month old was ecstatic: 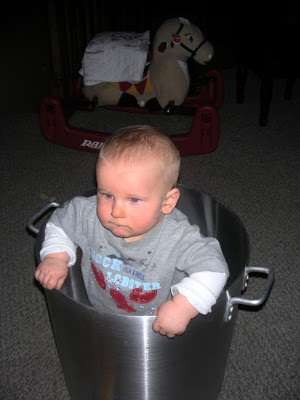 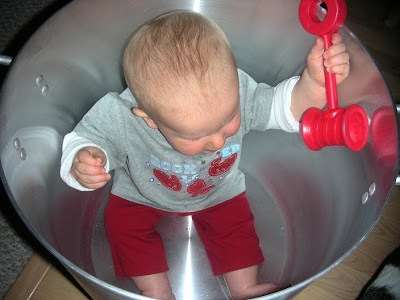 He played in that pot for a couple of hours. He really enjoyed himself in it. I almost don’t want to take the pot back, but I just can’t justify keeping it considering the price. Since he likes the pot better than the horse we got him for Christmas (in the background of the first pic) I suggested to Mrs. GrillinFool that we take back the horse and keep the pot. She didn’t like that idea!?!

So, what to do about boiling these lobsters? We talked about firing up my grill outside and putting the big pot on that but I think it would’ve been hard to keep the temp up considering it was about 35 degrees and windy outside. So we pulled out my 12 quart pot and got a couple smaller pots which did the job: 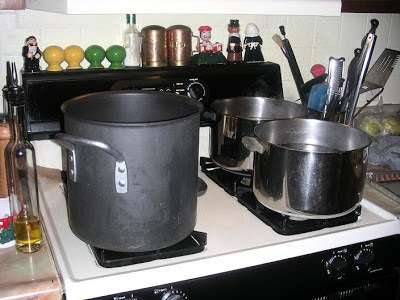 The big pot took on two lobsters and the other two took a lobster each.

For the sides I cut up enough red potatoes to cover a baking sheet. I put them in a bowl, slathered them with garlic, olive oil, black pepper and a few pinches of coarse salt and put them in the oven for 45 minutes on 400: 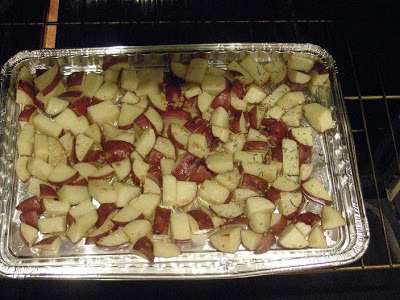 The right third of the potatoes I added some fresh rosemary: 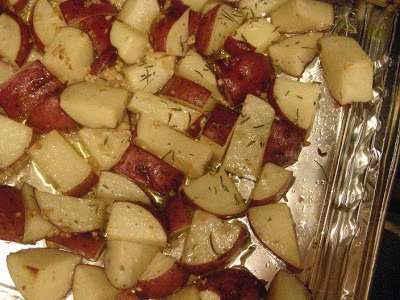 Here is a shot of the other two sides ready for that 400 degree oven. The prawns went in for 15 and the escargot for 10: 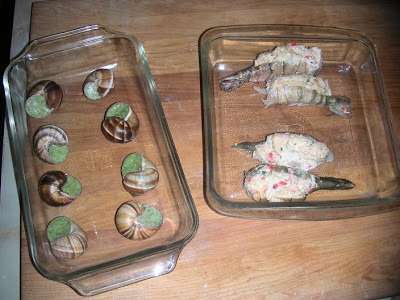 With 12 minutes remaining on the biscuits, the prawns in the oven, the escargot about ready to go I dropped these into the pot. ***Warning: picture of Dead Lobsters Walking: 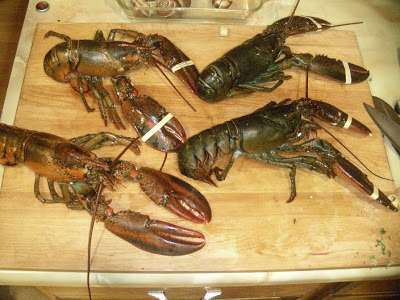 Despite the lobster being very similar to the cock roach in terms of their species, I had a hard time with the notion of boiling something alive. So I split their heads in two to put them out of their misery about 10 seconds before dropping them in the pots.

For the two smaller pots all I added was a large pinch of salt to each. For the larger pot I added two large pinches and a bag of crab boil for my FiL and I. I did not sample one of the lobsters cooked in the pot without the crab boil so I have no idea if it made a big difference. I will say this that everyone said theirs was delicious so it would seem that I couldn’t go wrong either way.

The smaller pots came back to a boil pretty quickly so I pulled those lobsters first. The larger pot having two lobsters dragging the temp down required a little more time. Here we have all four lobsters on the cutting board waiting to be plated. The ones on the right were just removed from the water: 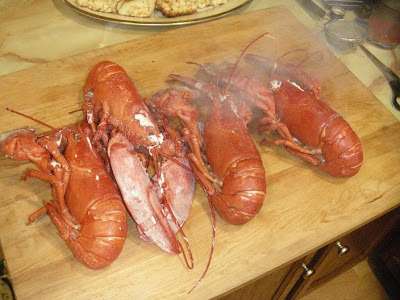 Here are the prawns out of the oven: 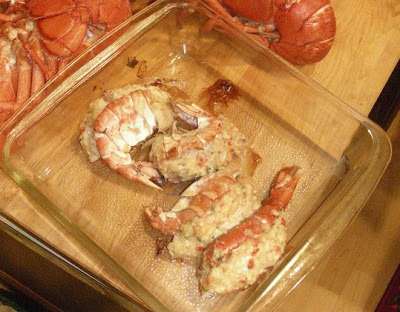 And the escargot. One fell over and leaked all the butter and herbs out: 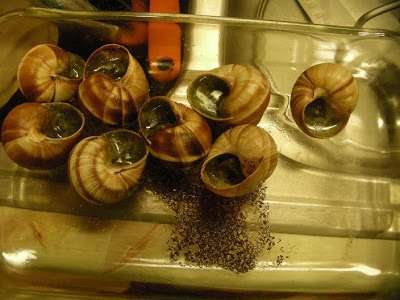 Of course we did it up right for NYE so the wife broke out the Lennox and the Waterford. Or as my FiL calls them, “the fancy eatin’ plates.” The wife likes to break out the fancy stuff for events like this. As long as I’m not doing the dishes, as none of this stuff can go in the dishwasher, I’m OK with that: 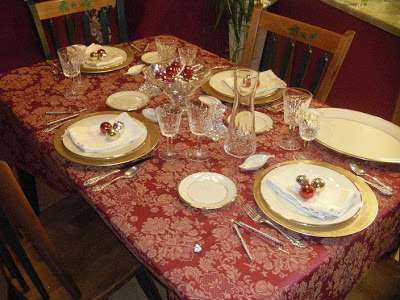 And yes, those are actually nut crackers that we use for lobster (and crab legs). We just don’t eat it lobster or crab enough, considering we live smack in the middle of the country to, to justify the proper gear here. The nut crackers and a good fork work just fine: 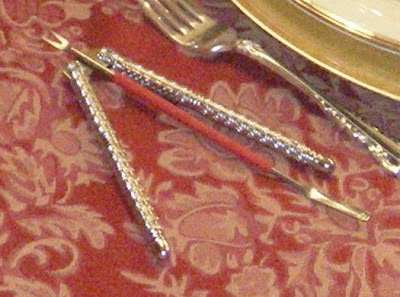 And the wine pairing is one of my faves – Pierano Estates Chardonnay – which is a rich buttery chard that played off the vast sums of butter that we consumed that night beautifully: 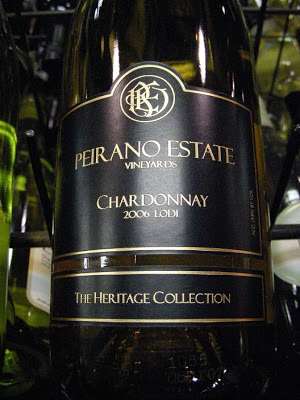 And of course the final plating before we luxuriated in some luscious lobster meat:

The obligatory, what would I do differently the next time:

Other than that I doubt I would do anything differently…Oh, and we are definitely doing lobsters again next year and the TheLobsterGuy.com will get our business again… 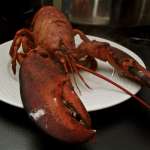 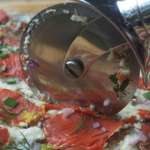 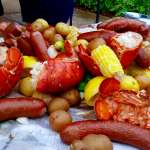 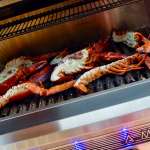 I got a very satisfactory result recently from steaming them. I put them on a rack in a covered roaster with the corn and new potatoes, shrimp, clams and about an inch and a half of water in the bottom. Steamed the corn and potatoes a little longer than the rest and gave the seafood about 15-20 mintues. Very simple and delicious. the nice thing about the roaster, is I could do them on the grill, although it was pretty easy right on the stove top and with the lid on the get them steaming, I don’t think they’d have picked up much from the smoke.