Sliders seem like a great idea, but most of them are bland little burgers that are a pain in the ass to prepare on the grill. Making sliders for just four big eaters means managing at 16-24 tiny little burgers which can very easily dry out because they are so small. And because they are so small, many times there isn’t much in terms of flavor other than the beef itself. If you’re a beef purist and that’s good for you, click the back button and move on. If you want to know how to build a better slider, both in terms of ease of preparation and flavor, then read on about my sliders stuffed with blue cheese and bacon. 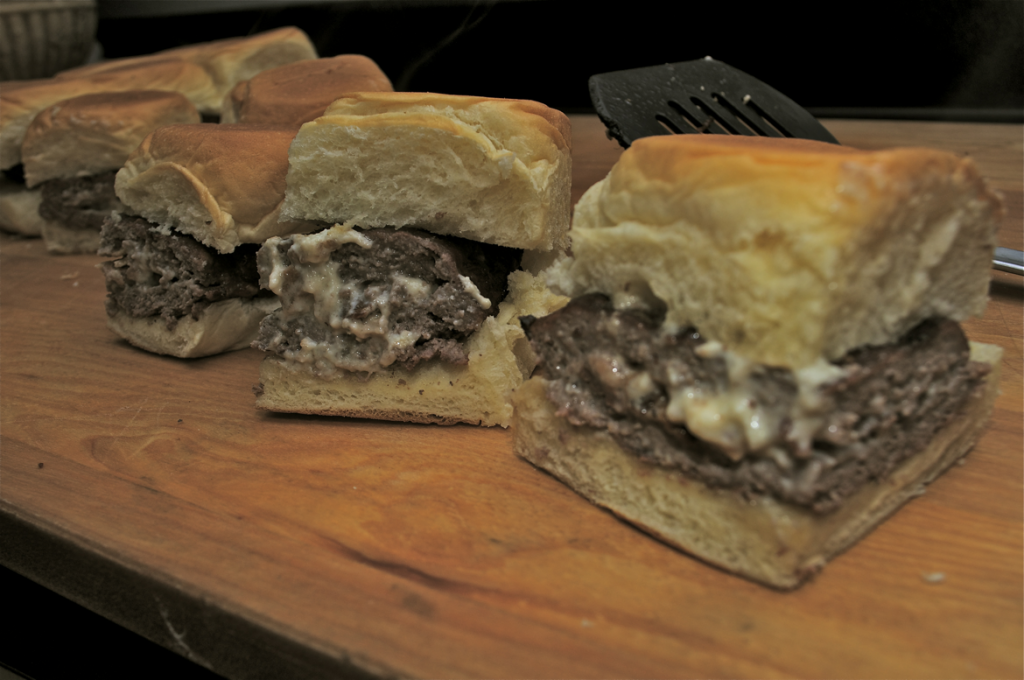 A couple things are going to come in handy for this recipe as you can see above, namely the pizza cutter and wax paper although a knife can be used for the former. Another item you will need is a rolling pin. Oh, I almost forgot. A big ass spatula would be a good idea too.

First up, mix the ground beef, garlic, black and white pepper in a bowl:

You might be wondering where the salt is. I’m using bacon in this recipe which was all the salt I needed despite the bacon being low sodium. If you like it salty, add some into this bowl before you work the ingredients together.

Now lay down a sheet of wax paper and then place the kneaded meat onto the paper:

Lay another sheet of wax paper down and roll it out with the rolling pin:

The goal here is to have four “patties” the size of six of the Hawaiian rolls (or half the package):

Why do I need four “patties” the size of half the package? This is the part where I make grilling of the stuffed sliders easier. Here we have the hamburger, still between the wax paper and the Hawaiian rolls covering what will be the two patties on the left, then the middle and then the right:

Now remove the top layer of wax paper and carve off slightly bigger patties than those sections of six buns and remove the excess from the outside:

Time to stuff them with some blue cheese:

You can save some time and just use the crumbles, but that will make it a little more difficult to keep the meat from breaking apart, particularly when the bacon is added. So what I did was worked this cheese together into a sort of big cheese ball and then rolled it out with a rolling pin in between sheets of wax paper like I did for the hamburger, although I only needed to make enough to cover two of the “patties.”

The blue cheese that I rolled out will not hold together so just pull off pieces of it and set a layer down on the two “patties” to the left, leaving a half inch around the edge:

Time for the magical pork elixir:

Crumble the crispy bacon and cover the two “patties” on the left:

Now time to stuff the sliders. This is why we haven’t put anything on the right two “patties.”

Take the far right patty and place it on top of the far left:

Next place the patty on the right on the patty in the middle:

Press the edges of the patties together, sealing the bacon and the cheese inside the hamburger:

When the edges are all pressed together like this you have stuffed sliders:

Make sure to really work the edges. There’s cheese inside of there. If you don’t work that hamburger well, and there’s a crevice, the cheese will ooze out on a hot grill.

I know what some of you are thinking. These aren’t stuffed sliders:

I realize that those are much bigger than sliders. And while they aren’t sliders yet, they will be. Trust me. In the mean time go prepare the grill for high heat grilling. This will work on just about any grill. I cooked these on a gas grill.

This is where the big ass spatula comes in. Place each giant patty on the hot grill:

Be patient here. Wait to flip the giant patties until the hamburger has released from the hot grill grates. If you slide the spatula under there and the meat sticks to the grates, back off and wait. It should take 5-7 minutes for the meat to release and you can flip to show those beautiful grill marks:

Once you get grill marks on both sides, remove the stuffed sliders from the heat and place each patty on the bottoms of the two halves of the Hawaiian buns:

Then place the tops of the buns over the soon to be sliders:

Those aren’t sliders, right? They’re party subs! Time to make them into truly stuffed sliders. Slice between the buns horizontally:

Now we have blue cheese and bacon stuffed sliders! 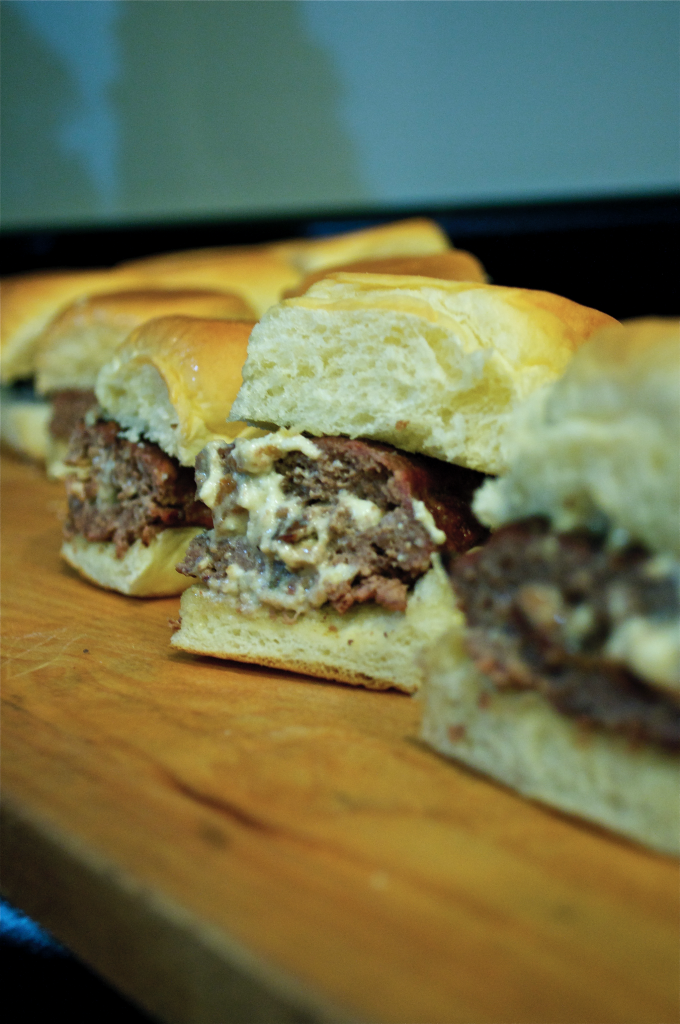 By grilling these in groups of six, they are much less likely to dry out, making sure your sliders are juicy and delicious. I planned on putting lettuce and tomato on these, but they were so good without the toppings I never did. How good? I ate eight of those sliders that night! I’m not proud of it, but I’m honest and fat. Pretty sure I will be making these on Super Bowl Sunday this year.

If you have any questions about these Sliders Stuffed with Blue Cheese and Bacon, feel free to leave them below or shoot me an email. 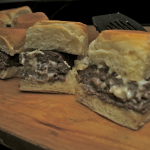 And here’s a collage of the process just in case you missed it above: 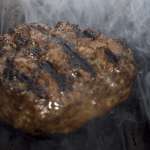 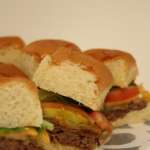 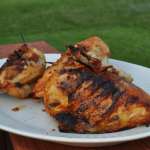 Hopefully this isn’t too blasphemous, but if you were going to add a dipping sauce for this as a party platter, what would you choose?

I would think a chipotle ketchup or maybe a pesto or maybe even and herbed aioli would be great.

Very cool idea. I never thought about stuffing a slider because of obvious size constraints…and never thought of this great solution. Great idea and I’m totally stealing it. Well not totally stealing because I’ll credit your site for the inspiration and link-back if I post it on my website. Thanks for sharing that recipe.

Just to clarify, “post it on my website” — meaning if I use the technique and not actually steal your recipe or article.

Tried these out tonight and they were awesome!

Love these. Have made them 4 times. Last night when I cut into them all the stuffing flooded out like water?! Any thoughts why?

Either it got way hotter in there than normal, or they needed some time to cool down inside there (some rest time), or the meat was sealed completely around them and the inside had no way to vent any energy until the you sliced in…