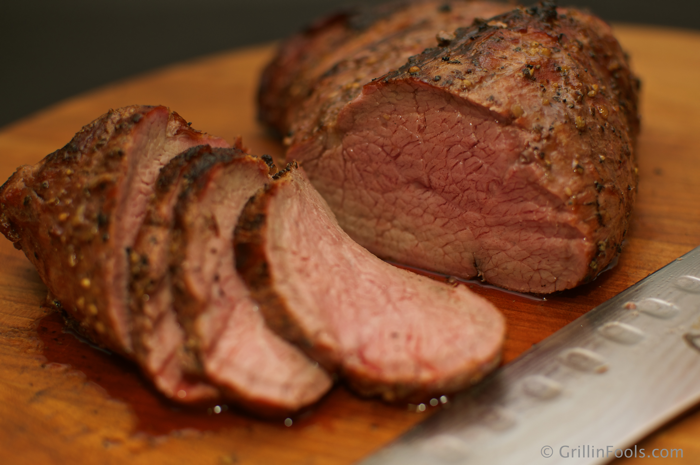 Smoked tri tip is one amazing way to feed a crowd some wonderful steak without breaking the bank. With traditional steak prices getting closer and closer to requiring a credit check and handing over a kidney to buy a half dozen steaks, this is one fantastic alternative. But first, what is a tri tip? 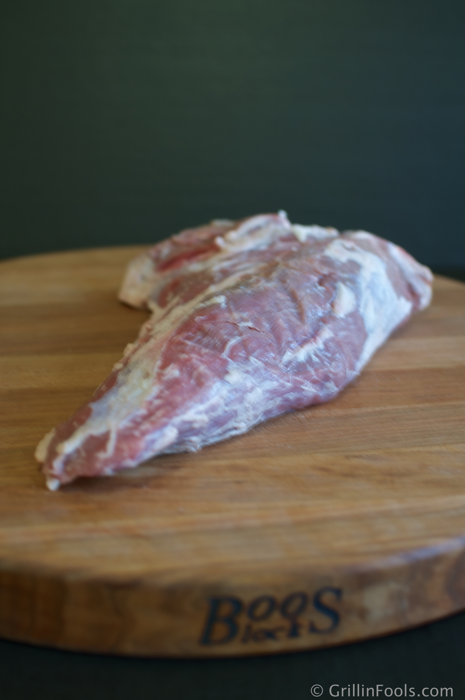 It’s a beef roast that is part of the bottom sirloin and is triangular shaped. A tri tip roast generally runs about 1.5 – 2.5 pounds. As you can see here the cut is indeed triangular, which is where it gets its name. It has three tips thus a tri tip: 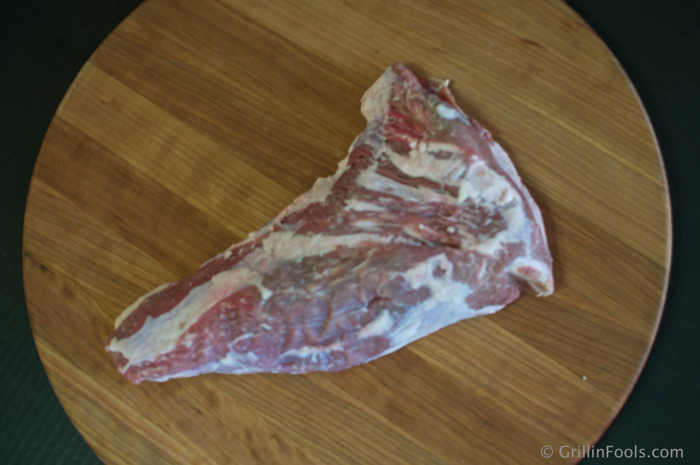 Some are thinking that sirloin is pretty terrible steak compared to say a NY strip or rib eye. Normally I would agree but there’s something about it being in a roast, grilled whole and then sliced that makes it much more tender and flavorful than a typical sirloin steak. I would put some thin sliced tri tip up against NY strip or rib eye and at a considerable discount.

The beautiful thing about tri tip, other than how cheap and delicious it is, it can be grilled any number of ways. Such as these Grilled Tri Tip Tacos I made. Or here’s Arthur’s take on the traditional Santa Maria style tri-tip which is where this cut first got popularized in California.

For this recipe – smoked tri tip – I’m going simple: a rub and reverse sear is all it really needs. Why not go with the flame sear first like in the Santa Maria style? Because then the tri tip steak won’t take on the smoke flavor. By smoking first and then flame searing, and flame searing I WILL, I get the best of both worlds.

There was some hard fat on the flat side of the tri tip that I trimmed away before seasoning. You can leave it there, but removing it is healthier than leaving it.

Hit the tri tip on both sides with a heavy dose of coarse salt and then the rub: 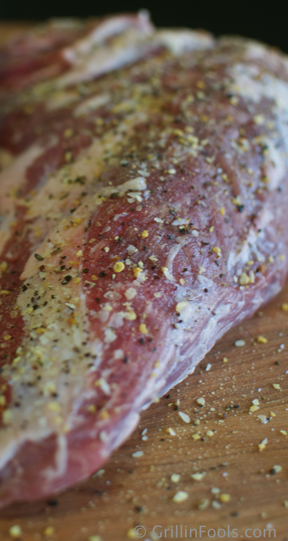 Really cake that rub on the steak roast. With a traditional steak cut, I would dust it on to let the flavor of the meat come through more. But with a roast like this, each slice only has the rub around the outer edge so don’t be bashful. Then prepare the grill for two zone or indirect grilling with an internal temperature of the grill around 275. For traditional grills that means coals or hot burners on one side and the meat on the other. In the case of my kamado grill, I would normally go with a circular plate setter in between the coals and the meat to deflect the heat around my tri tip, but I want to sear at the end so I put a half moon plate setter on one side, added a chunk of smoke wood and put the tri tip over the plate setter: 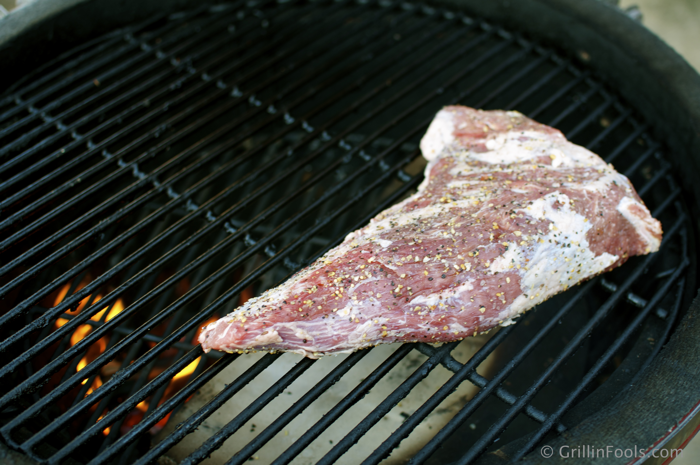 You can see the plate setter under the soon to be smoked tri tip and the fire on the other side. If you are unsure what smoke wood to use, try this post where I have literally dozens of types of smoke wood and what meats they pair well with.

After about 45 minutes the smoked tri tip is still pretty rare but is starting to brown up somewhat: 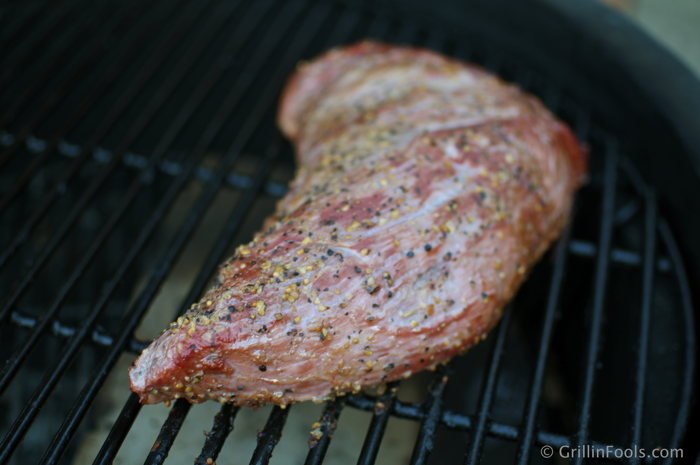 At about an hour and 20 minutes the smoked tri tip looked like this: 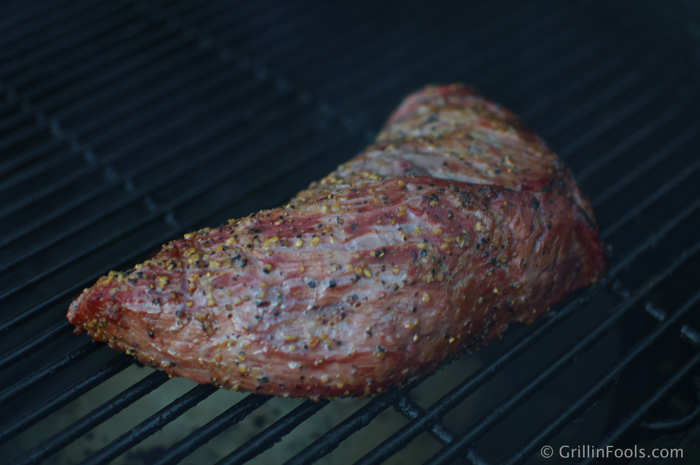 I decided to give it a check with my Thermapen instant read thermometer: 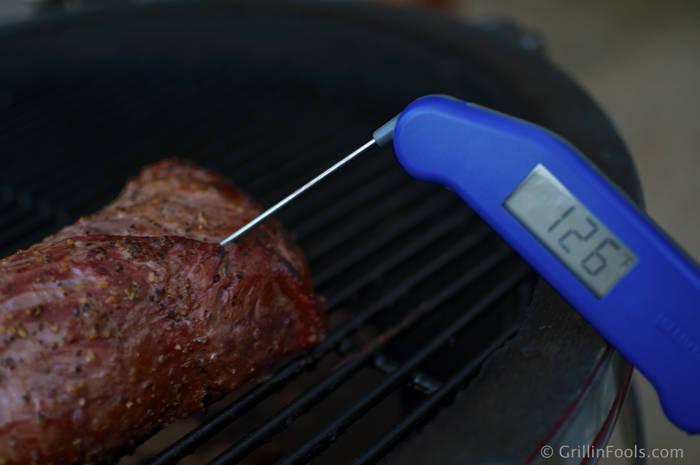 That is really rare. It’s perfect timing for the sear part of this recipe. I could move the steak over to the other side of the grill and get a nice sear, but I want to really blast it, so I took the grill grate off, removed the half moon plate setter and placed the steak roast inches above a blazing hot fire. FLAME ON! 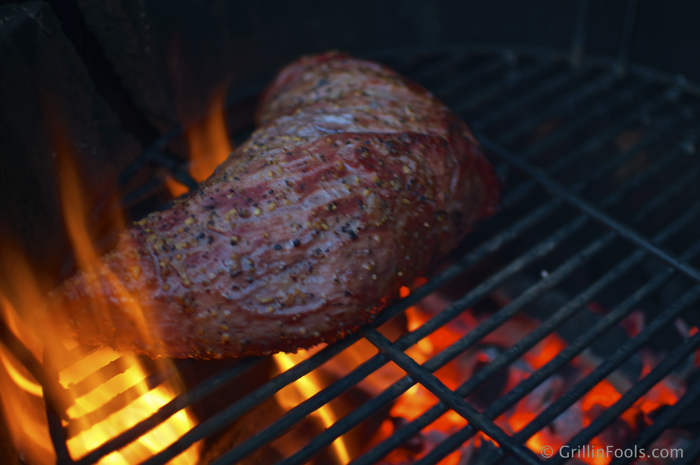 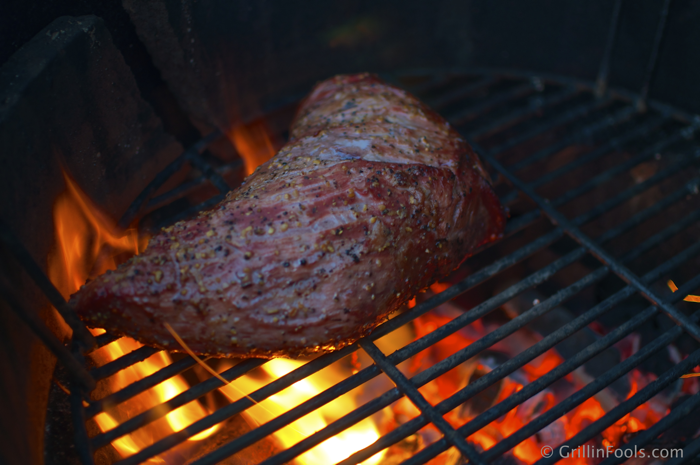 Simply sear the smoked tri tip on both sides until there is a nice flavor crust or in this case about 3-4 minutes per side. One side is flat (the fatty side) and it gets better charing than the curved side. Here is the curved side after the sear: 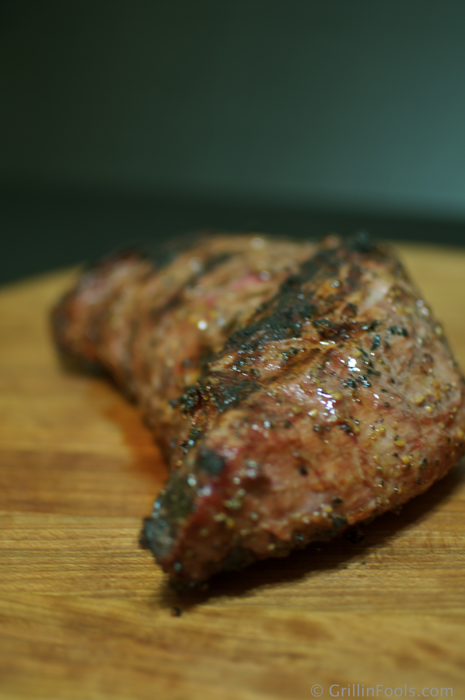 And here is the flat side with much better charring: 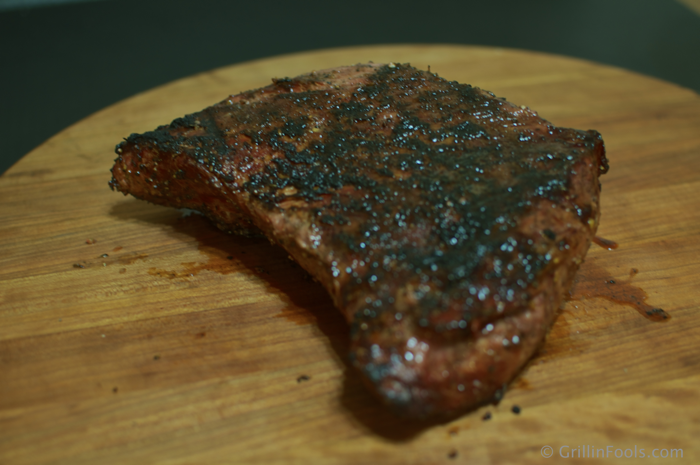 Let the smoked tri tip rest for at least 10 minutes to let the juices, in an excited state from the heat, to calm down and redistribute throughout the meat. 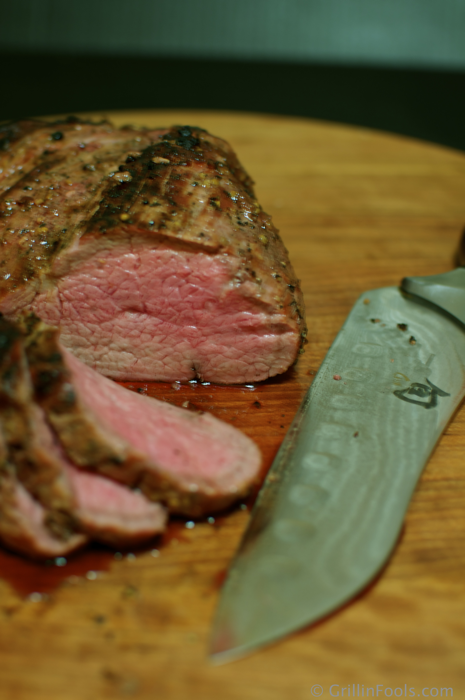 And a bonus sliced, meatporn pic: 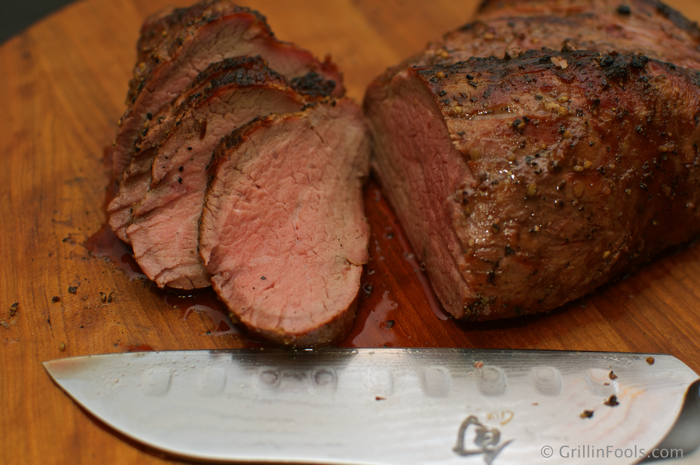 So this slice was only about a third of the way into the smoked tri tip. Slice at the middle and it will be more rare: 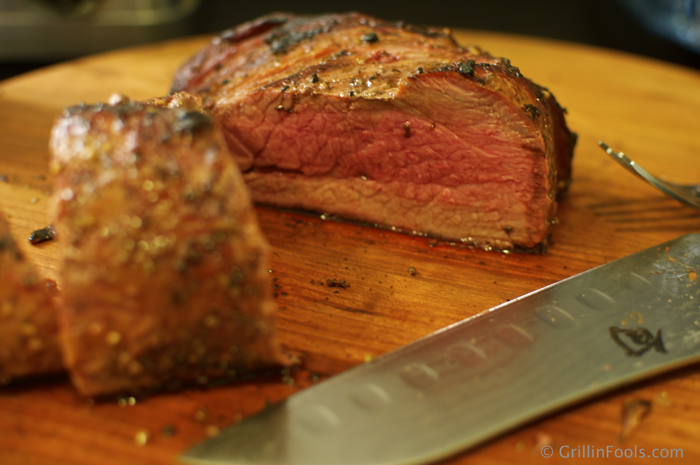 But what about the smoke ring. Here’s a slice from the narrow end which is pretty well done. I used this piece to show two things. First, when feeding a crowd, someone, invariably, wants theirs well done. Boom. Here’s the end. Second, check out that slammin’ smoke ring! 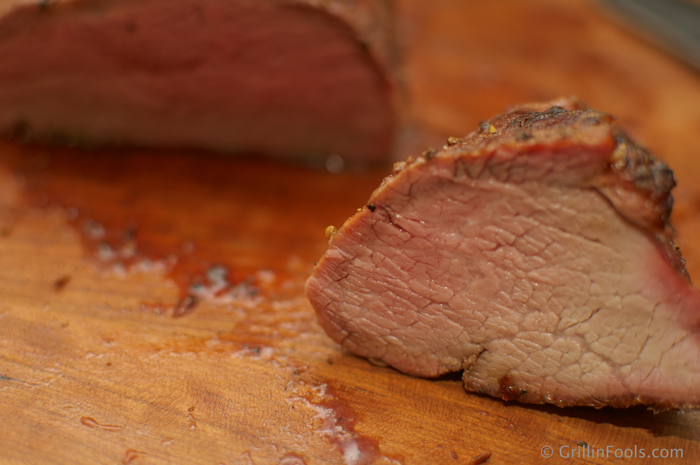 The steak is infused with a lovely smoky flavor on top of the caramelized proteins from the flame sear on top of the wonderful rub. Did I mention incredibly tender and juicy? And at the cost, if you’re trying to go the paleo route, the smoked tri tip is an outstanding option. Oh, one more note. Some might think this is way too done. Normally I like my steaks much more rare. Tri tip needs to be more than medium rare or it can be stringy.

If you have any questions about this smoked tri tip, feel free to leave a comment below or shoot me an email.

I reshot the pictures included in this post and completely rewrote it so the write up matched the new pictures because my first time around the pics were horrendously bad. I’m not kidding. Scroll down past the printable recipe card for most of the pics and captions of the original post. I think I’ve come a long way since November of 2011 when the pictures below were taken. And as an added bonus, there’s a collage of the process at the very bottom.

Here are some other recipes involving the tri tip. 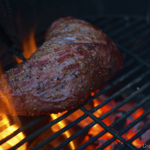 If you would like a tri tip that is a little more well done, leave it on the side with no coals until it reaches 135-140 before searing to get meat that is medium. 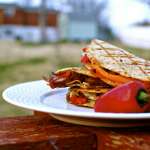 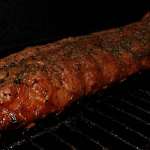 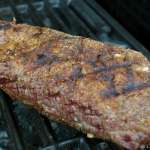 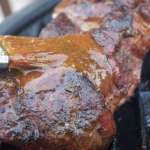 This looks very good and easy to follow. I will give this a shot soon (right after I tackle my first brisket). Thanks!!!

Hello Guys. I’ve used this cut of meat for several years. I discovered it from a friend of mine. And the method you use is just what I have been doing. I have also done it with out the sear and it still turns out great! Thanks for the site….you guys are on Fire…..lol. Very informative.

Good recipe. I make mine my own with some worcestershire, italian dressing and lemon juice. i have not needed to grill mine either. The picture potion of this recipe says to run lower than 220 deg. The directions at the bottom say 275 to 325 deg. I run mine 200 – 220 so I can get the longer cook and smoke time.

Thanks for spotting the error there. 275-325 is what we cook so many things at, that I must’ve put in the wrong number. I’ll correct that momentarily!

I learned about tri-tips when I was learning to butcher deer. Then I saw them at John’s Butcher Shoppee on Walton. I love rub with Santa Maria seasoning then cook it over medium coals for 30 mins. Such a change of pace and there are always left-overs. You guys have a great website!

Thanks Marty. We work hard, but we love doing what we do!

Tritip is such an awesome cut to smoke. I first learned about it when we lived in CA. Its incredibly difficult to find in the Midwest!

It is hard to find around here but is becoming more and more available. I highly recommend getting to know your local butcher and asking for them. ORder a handful. You can always toss a couple in the freezer.

Oh yeah, the local butcher is the only place here in Chicago you can get Tri Tip. When we lived out in CA though, you could get it everywhere. I actually didn’t even know the cut existed until we moved out there.

Keep up the good work.

Good that you have a butcher you can rely on. Next tell him you need some teres major steaks. You can thank me later!

Why would you ever cut that delicious fat off!?

The older I get, the less fat I need. The steak is wonderful without it. Sure, if you wanted to leave it, that would be fine too…

This is such a great cut.

I would “highly recommend” cooking the reverse method with Zebra (salt, pepper, and garlic)…….low and slow until internal hits @ 130 and then go to the high heat/radiant to sear never bringing above @ 134/135. Wrap and rest 10 minutes. OOOOH MAN!

Once you have the method down……..then experiment with add’l flavors and/or brine/marinade. Such a great cut of meat does not need any more than the basics.

This looks so good! I am going to give this smoked tri-tip a try.

How long did you brine?

I didn’t brine the tri tip for this recipe…

Relly good, I cann’t wait to make it, can I use my eletric somker to make it, if so, I will go out with my family for smoking this weekend, thanks

Yes you can use the electric smoker to smoke it, but you need to use something else to do the searing if you want to do a reverse sear. Maybe just smoke it to the desired temp and skip the sear…

I will be serving smoked tri tip at poker nite about 915 pm don’t want to babysit smoker . Can I smoker in mid afternoon 430 ish wrap in foil then wrap in towels put in cooler if I cook til 115 degrees will the temp get to 130 wrapped in towels

I don’t think it will get that hot. But you could always take it to say 115, and then right before the game warm it up and give it a quick sear…

I doubt it goes up more than 5 more degrees even when wrapped.

Reverse seer, what a great idea. I have a seasoned tri tip in the frig now. Anxious to try the reverse sear. Great site.