The crown roast may be the quintisential holiday entree. Perfectly roasted meat, the little chef hats covering the bones, maybe a bed of some sort of greenery to make it all kinds of festive? I’d never done one of these and decided to take a shot at it for a Christmas Dinner recipe. The roast itself was outstanding. Delicious and juicy. But the presentation wasn’t quite what I wanted. I learned a TON from this cook and I’m going to share that knowledge so you don’t make the same mistakes I did when both sourcing and cooking this most festive of roast beasts. All that being said, this simple grilled crown roast recipe is incredibly easy. Particularly if you learn from the mistakes I made here. 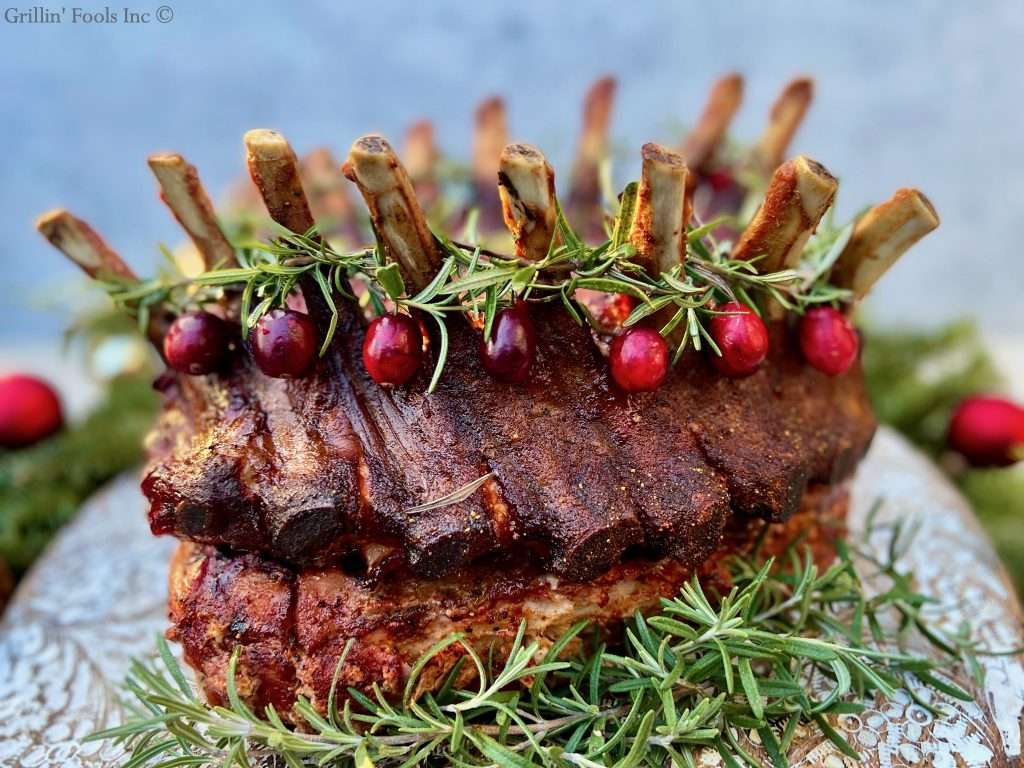 Before we dive into the crown roast, we full acknowledge that some are partial to prime rib or beef tenderloin for Christmas dinner. And even some will do a turkey on Christmas or even a ham. And yes, we’ve done all of those. The crown roast was a new recipe for us. It’s pretty intimidating looking, but in all reality, it’s fairly simple.

Let’s start off with the first lessons learned

Dad picked up the crown roast. I’m not going to say where he got it, because this will not paint them in a good light. It arrived in this large, disposable plastic container: 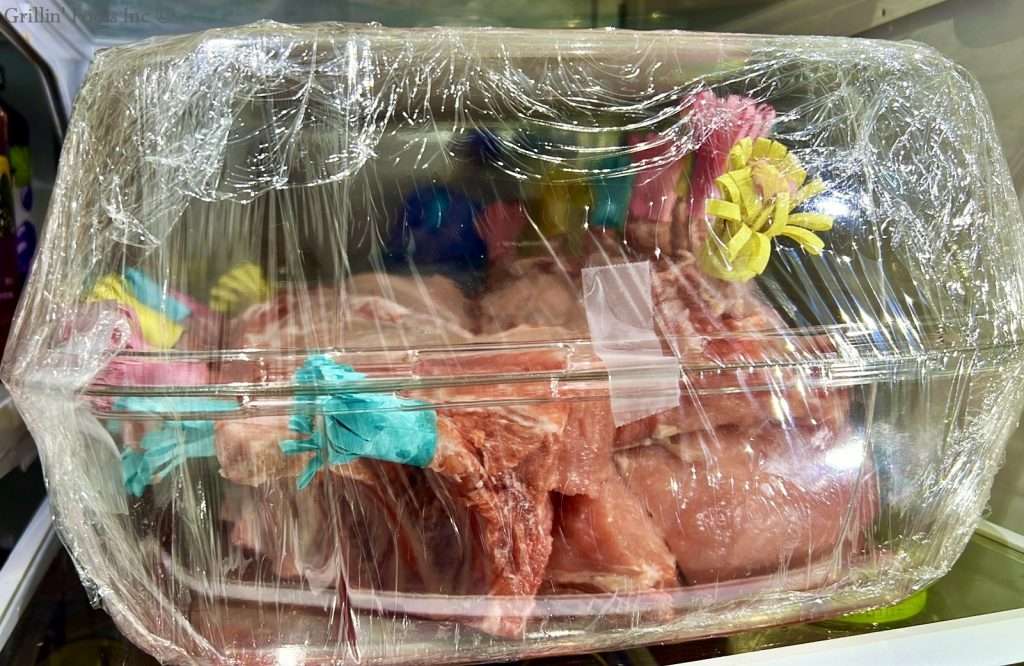 There’s a LOT going wrong with this. Before we get into that, let’s do a little meat science lesson on the crown roast

What is a Pork Crown Roast?

A crown roast can be made by a single, long, bone in pork loin placed in a circle and tied with butchers or bakers twine (they are the same thing) to stay in that circular form. It can also be done with two shorter, bone in pork loins, also tied together with bakers twine. There are two ways of cooking this. With or without a stuffing in the middle. I went without it to further simplify the recipe.

Now that we know a little more about what a crown roast is, let’s talk about the issues with this one. This one is comprised of two 9 bone roasts tied together. But not tied together well. The roast on the left laid down flat on the ride from the store to my fridge. When that crown roast leaves the butcher, it should look perfect. Don’t take a crown roast that looks like the one above.

The second mistake I made:

2) Don’t assume it’s easy to tie one of these things yourself.

At one point in my life I thought doing some dry wall patching was easy because I’d seen the process on HGTV and a couple YouTube videos. Oh sure, I did a passable job, but it took me about a month of mudding and sanding to get it close to smooth when a professional gets it done in a couple 20 minute sessions. Leave this one to the professionals. I’ve trussed a lot of meat in my life and did a terrible job on this one.

Also, a butcher that has experience selling crown roasts would never put the little bone toppers on a raw roast.

Those bone toppers are made of paper. So the next day when we tried to take them off so we could season without covering the bone toppers with spices that might stain them, they just fell apart. After 24 hours on those bones that are a little moist, the paper disintegrated as soon as we tugged on one. Had we smoked the the roast with these on, I’m guessing the smoke would have discolored them. They do not belong on a raw roast. Or, if they put them on the raw roast, that’s fine if they send you home with another set for after cooking the crown roast.

OK, let’s get on with prepping this thing so we can get to one more lesson I learned. It looks perfect here, right? Well that’s the last time it looked perfect: 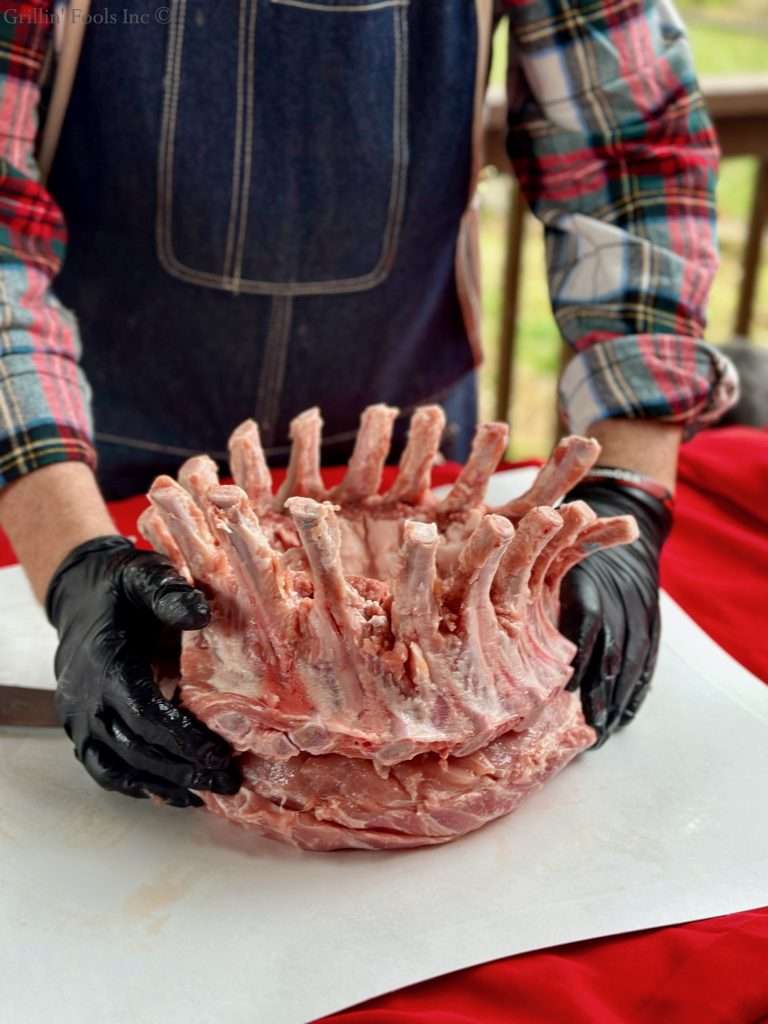 How to prepare a crown roast for the grill

Since I had to retie this thing, I went ahead and seasoned while it was apart. Nothing to this. Salt and seasoning on both sides of those pork loins: 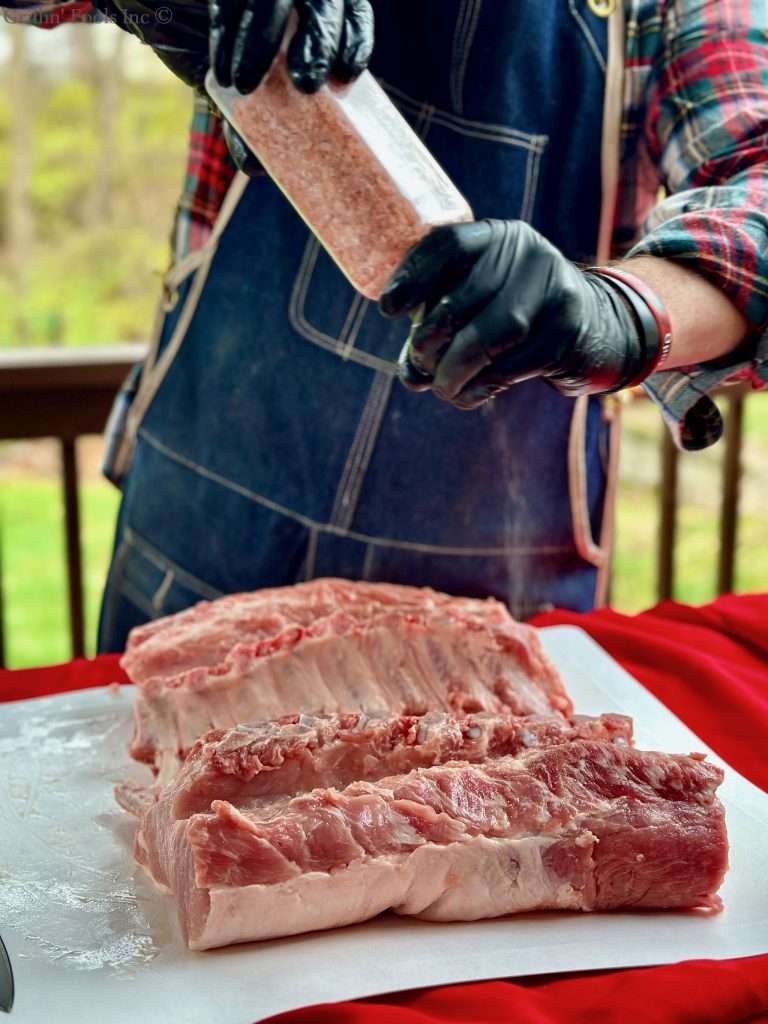 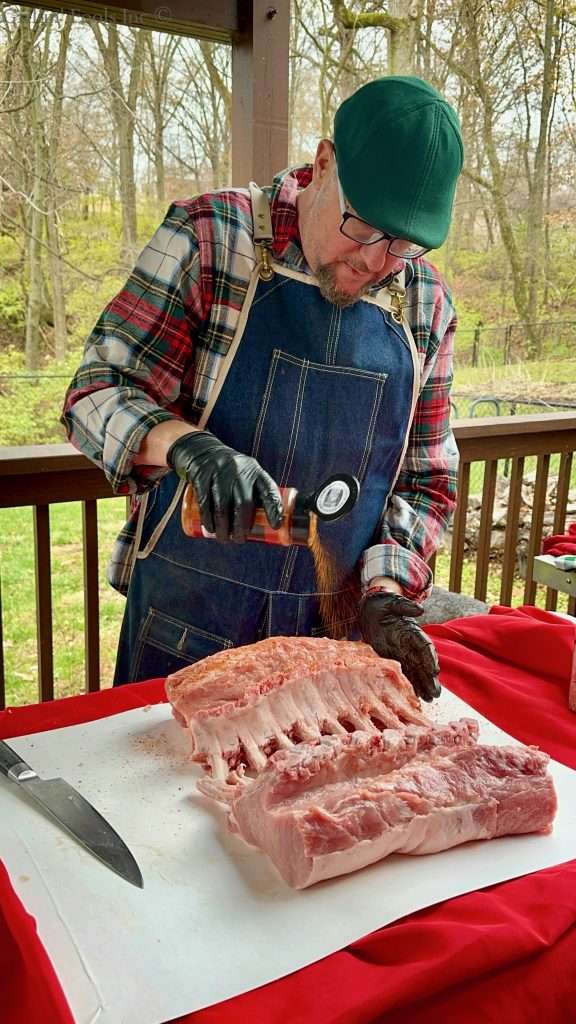 Now it’s time to tie it back up. In order to get a more rounded shape, I lopped off one of the chops on one of the loins and went ahead and cut a slit between the bones down each pork loin. The loin in front is already sliced about an inch in between each bone, and I’m working on the one in back: 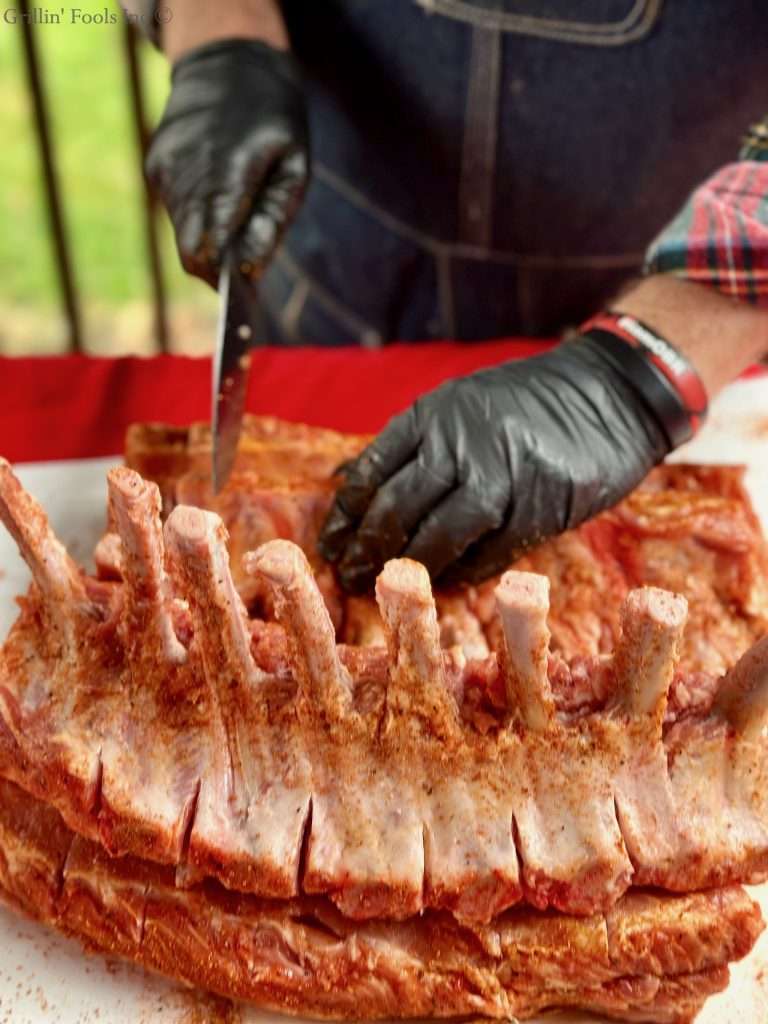 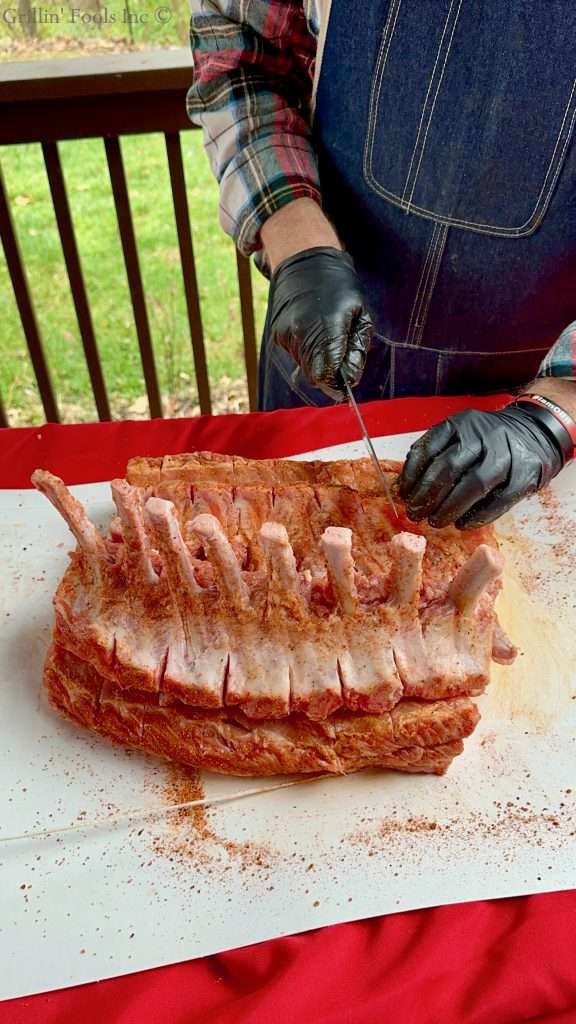 This pretty much takes two people. One person to hold the thing together while the other runs a string in the groove right below where those slits are. I ran a piece of bakers twine there and one lower to make sure it stayed circular and I still blew it: 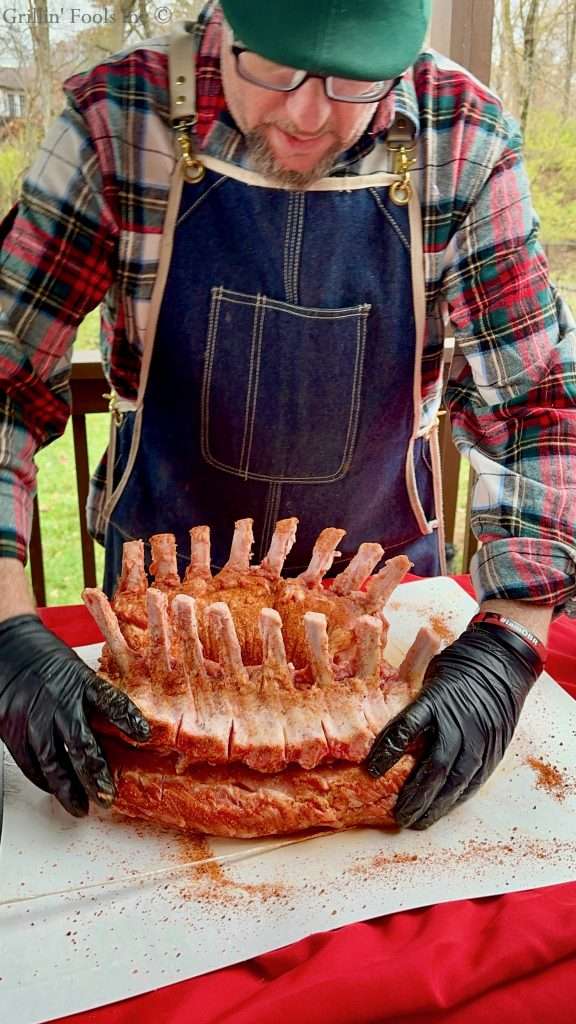 Once I got it trussed up, I covered each bone with a small piece of aluminum foil and placed it in a double stack of disposable aluminum pans, and yes, we’ve already lost our circular shape: 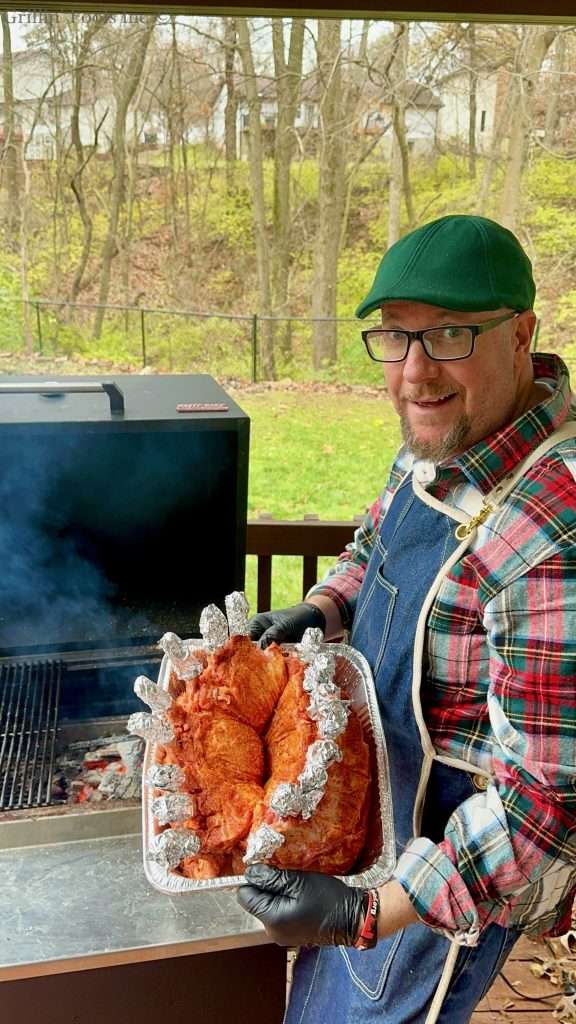 Also, to really up the the holiday vibes for your Christmas dinner, sport your best Christmas flannel and green scally cap.

Back to my next lesson:

I think a metal can, like maybe a tomato sauce can with the label removed, stuffed in the middle would’ve probably made all the difference. And once it was ready to serve, remove the can and pray it holds its shape.

How to Make this Simple Grilled Crown Roast Recipe

I set up my Hasty Bake grill for two zone grilling. I have my Rockwood Charcoal banked on the right side and the crown roast on the left. I placed a couple chunks of pear wood over those coals. If you don’t have access to pear wood and need to know what pairs well with the woods you have access to, click this link for the best list of smoke woods on the innerwebs: 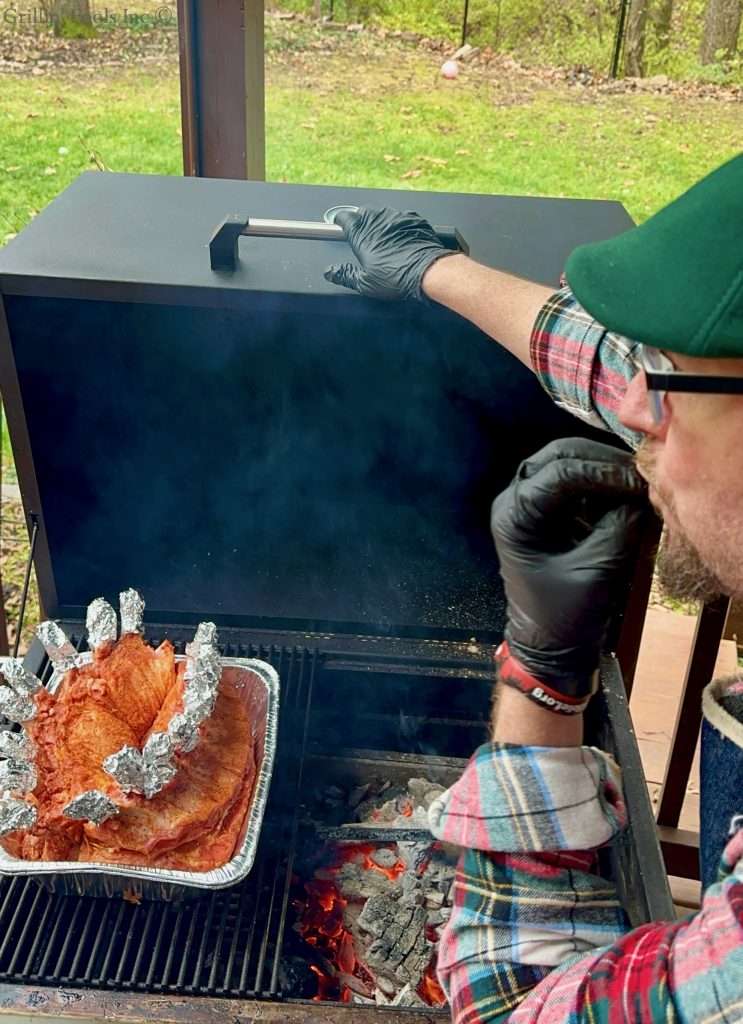 Target temp inside the grill is 300F (+/- 25F). Once I close the lid, the Hasty Bake Legacy 131 does something very interesting. With no vents at all in the hood, the smoke goes up past the meat, hits the top of the grill and can’t escape without going back down past the meat a second time creating a smoke and heat vortex. And being able to raise and lower that coal bed by well over a foot, I can switch between smoking and searing in moments. Sure we aren’t reverse searing here, but this grill is ideal for it.

I closed the lid on the Hasty Bake for about 10 seconds and opened it again. Is that enough smoke? 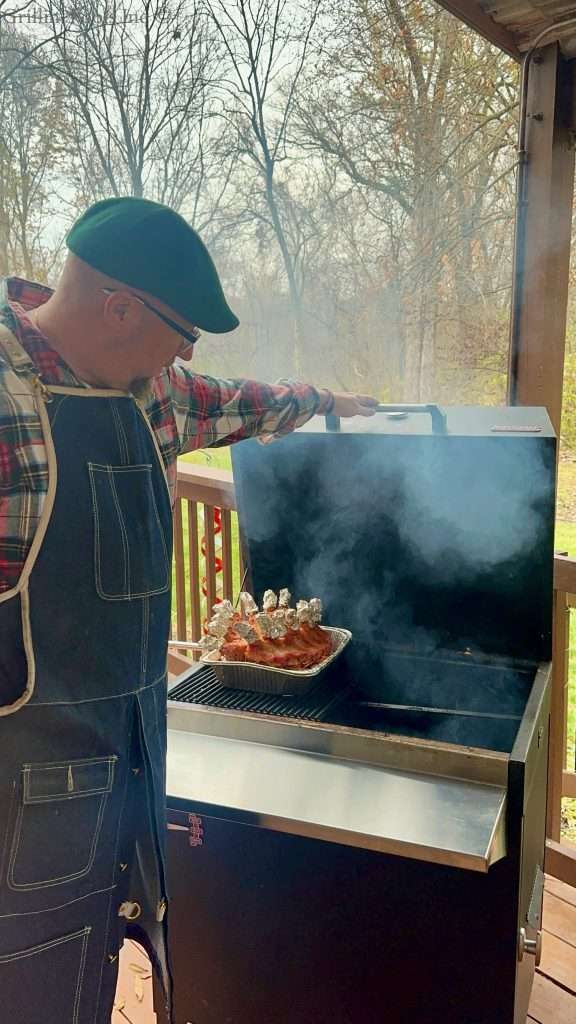 With the pure burning Rockwood Lump Charcoal, the only flavor entering the crown roast is the fruitwood smoke. That’s the way it should be.

After an hour the pork crown roast starts to brown up and I rotated the pan 180 degrees to get some even cooking: 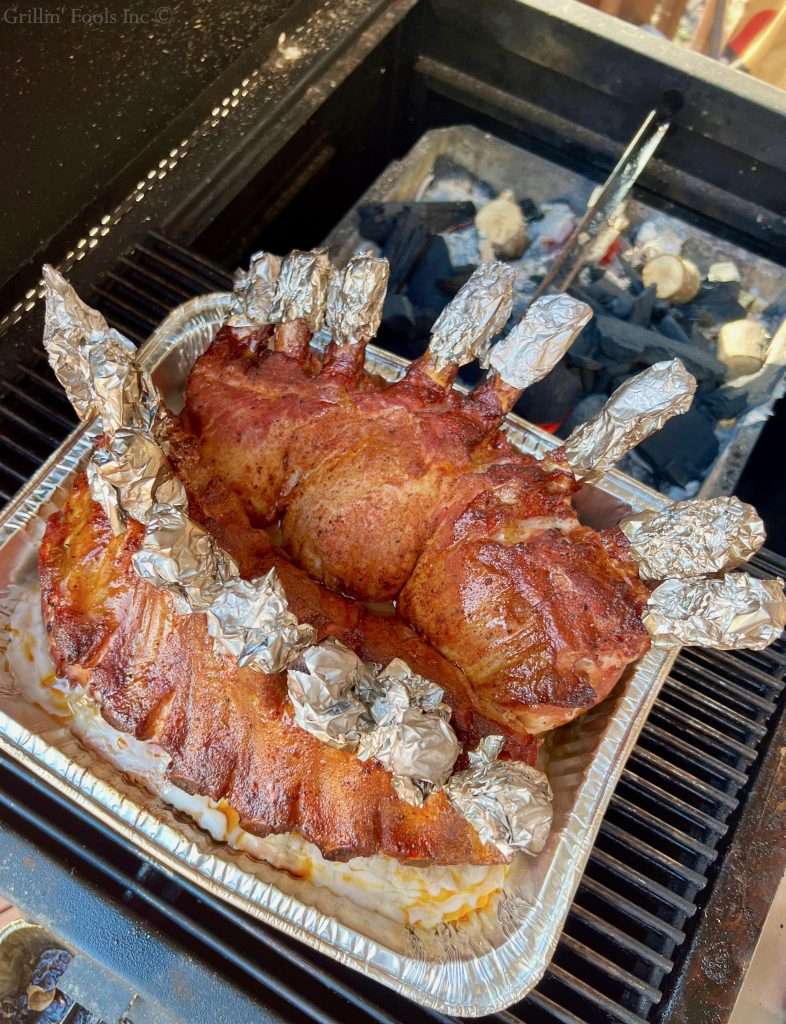 Here’s where I made another mistake.

5) Drain/remove the fat that collects in the pan

See that white stuff between the aluminum pan and the crown roast? Get that out of there. Either poke some holes in the corners of the pan to allow the fat to drain or use a spoon and a turkey baster to extricate the fat from the pan. Because by the time the crown roast is done, that pan is going to have a couple inches of liquid fat. There was some heavy, solid fat on the top of the pool of liquid fat, so even if you poke holes in the pan, that thick stuff will need to be scooped out. I’ll show why this is a problem later.

For this simple crown roast recipe, I left the fat there the entire time. Luckily I had lots of rosemary from dad’s herb garden to hide the damage. So don’t go light on the rosemary. With its similarity to evergreen foliage, rosemary not only hides many imperfections but also makes our holiday roast even more festive and jolly, particularly with the fresh cranberries.

Here’s another angle of the beautifully browned crown roast but anything below that layer of fat is not going to brown as much as the meat above it that’s exposed to the smoke: 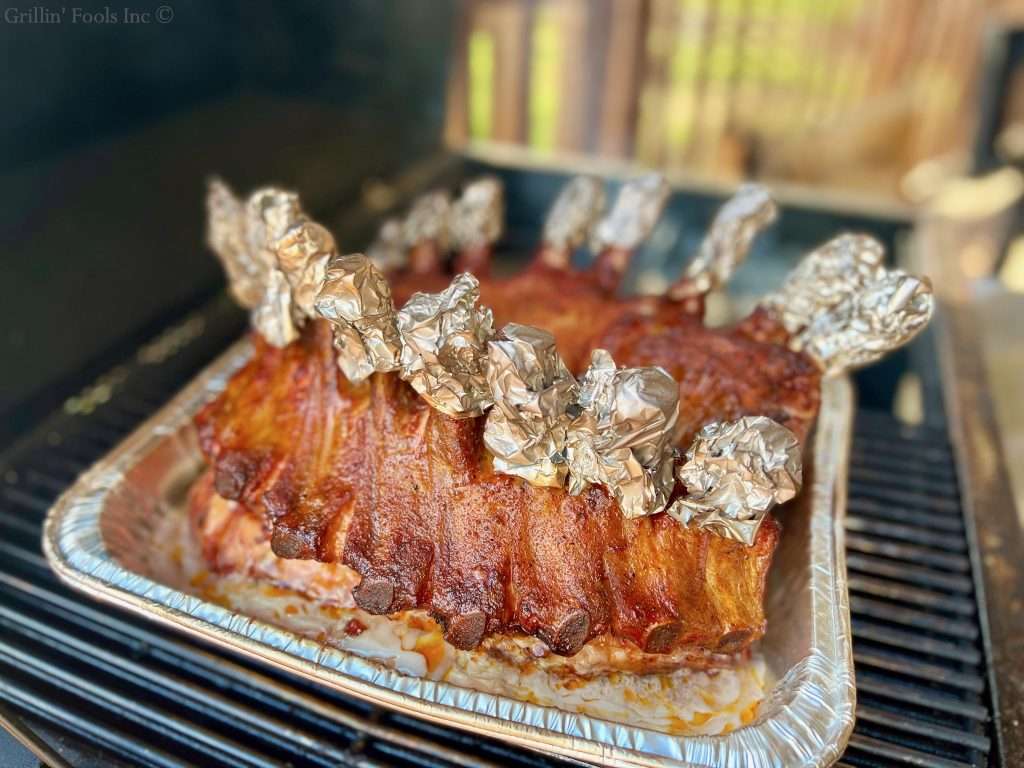 When our pork roast reaches 145F we can pull it from the grill. You read that right. According to the USDA, we no longer have to cook pork to well done, medium well or even medium. We can have a little pink in there and cook to just medium rare which means juicier and more tender pork. So this pork is almost done. Your kids will probably dig pork more if you cooked it to medium. Think about it. They don’t know about the old wives tale about cooking to well done for pork. give 145F a try.

Here we are at a little over 145F at about 150F and the crown roast is well roasted around the outside and ready to come off the Hasty Bake: 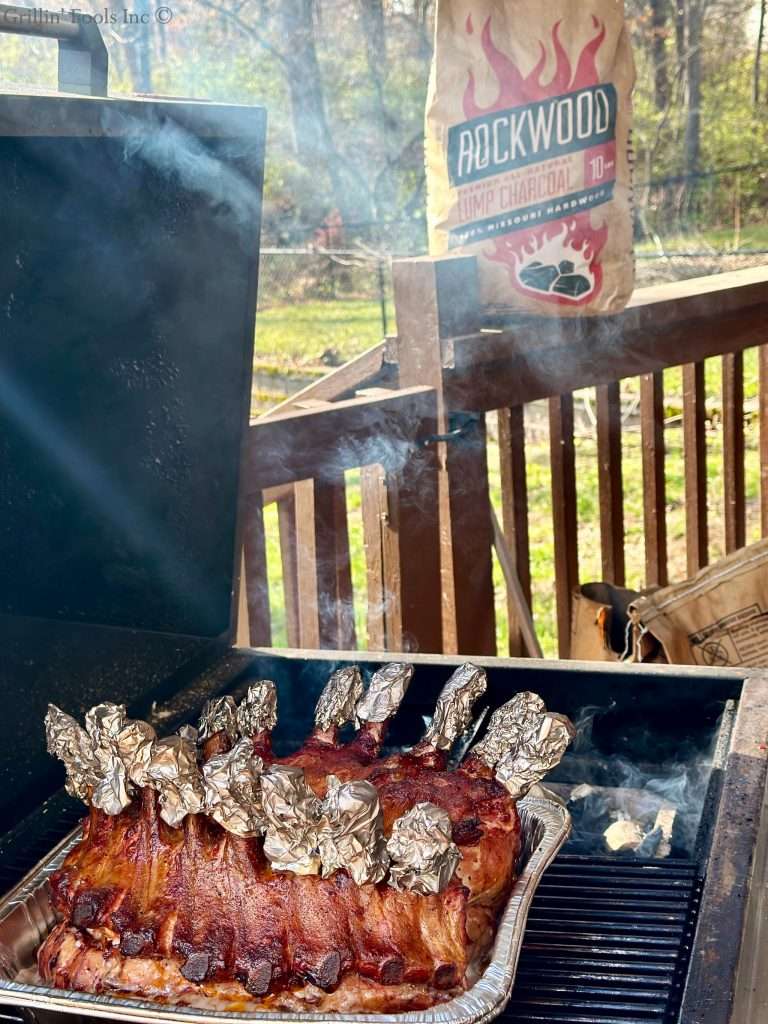 Our total cook time was about 3 hours and 20 minutes, but always cook to temp not time. A slightly smaller roast or one with a little more or less marbling could drastically change cooking times.

Here is our crown roast plated with some rosemary woven through the bones and cranberries on toothpicks placed between the bones. There is also a bed of rosemary around the base, hiding the bad spots: 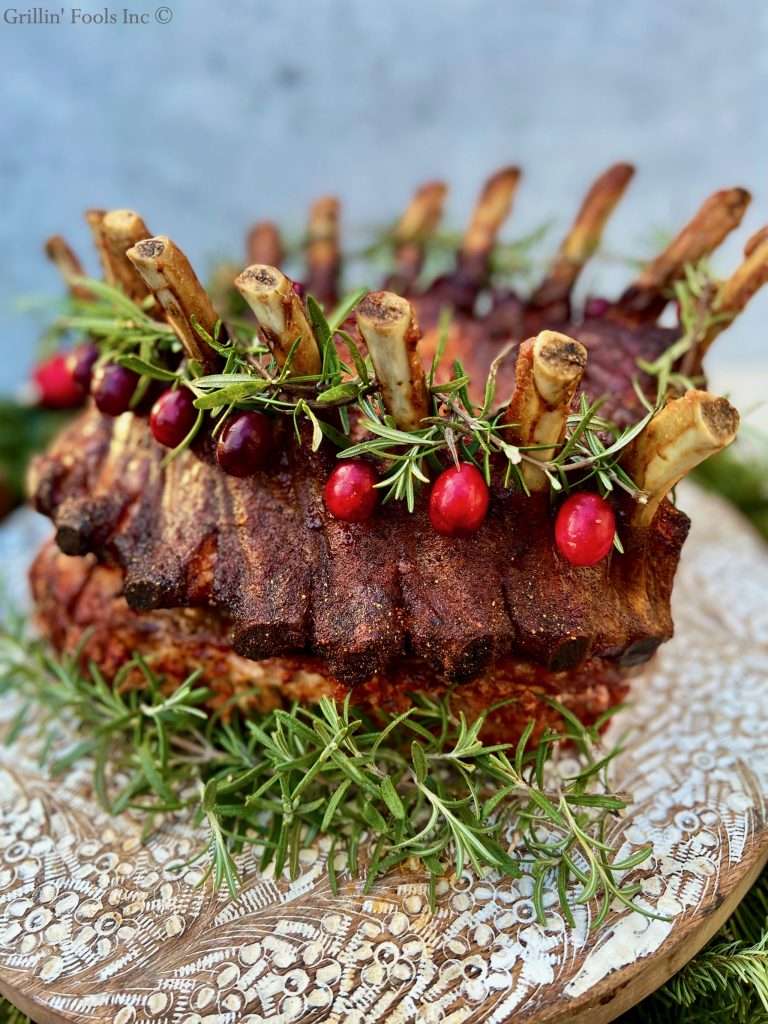 It looks pretty good from this side, but there’s a reason that rosemary is higher up on the right side:

But from above we see how the bad tie job impacted the symmetry of the roast: 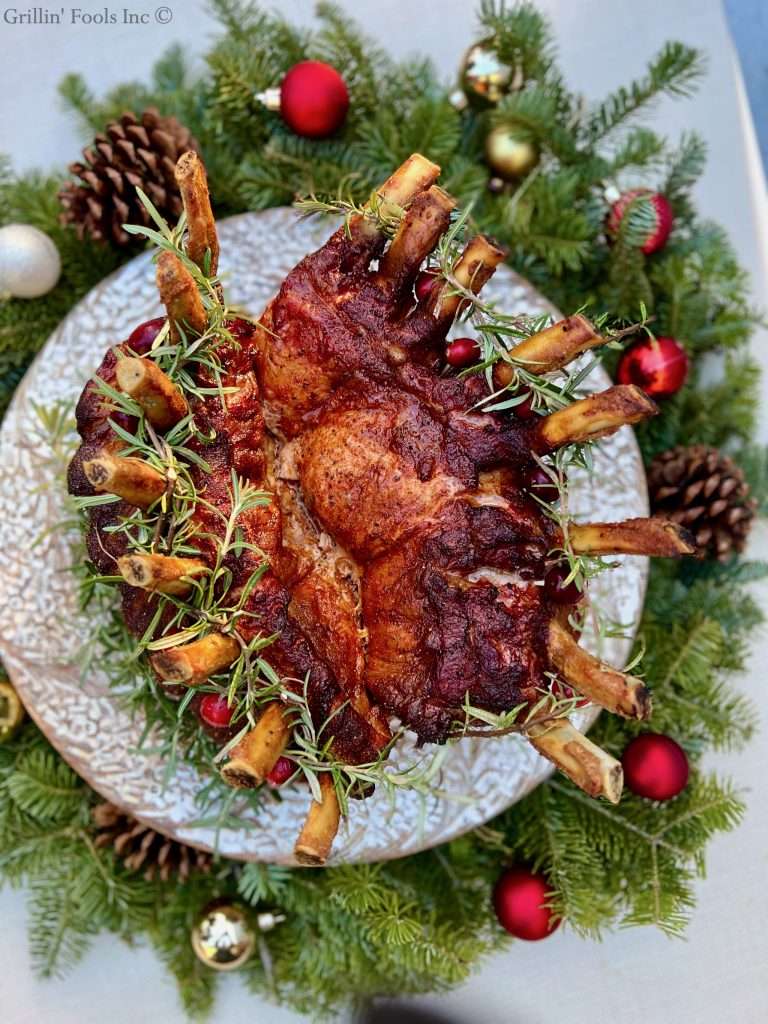 And here is one of those bad spots on the side that disappear with some rosemary: 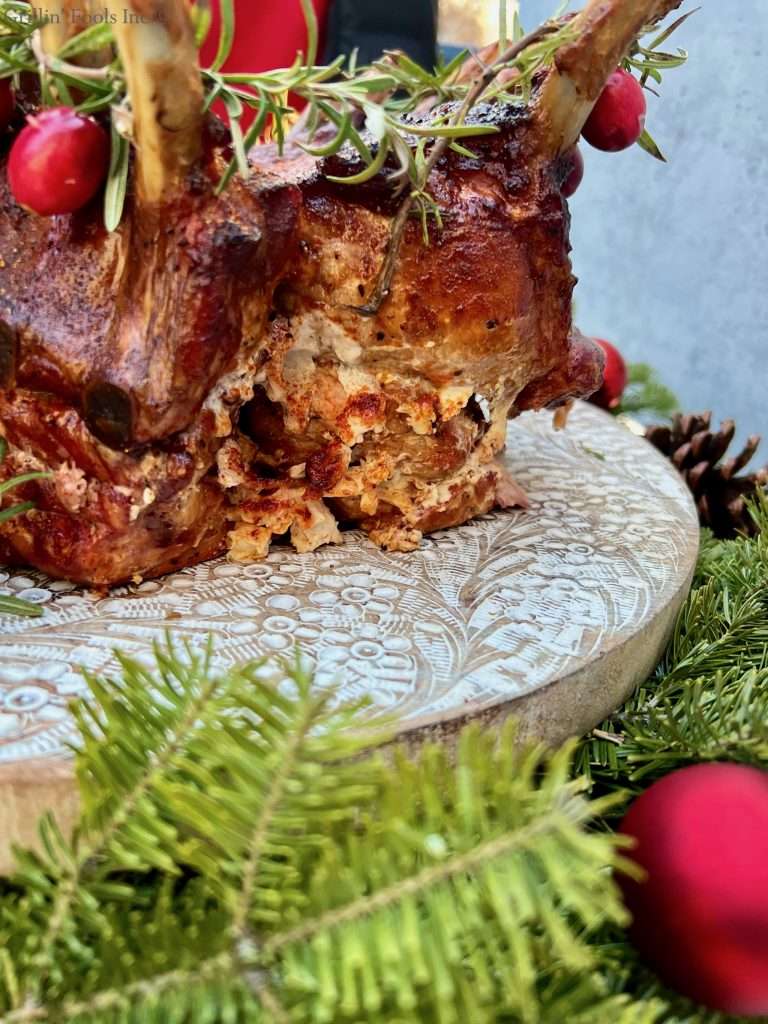 A round cutting board sitting in the middle of a fresh door wreath makes for a great presentation along with the rosemary hiding imperfections. I wouldn’t buy a live wreath for any other meal throughout the year, but it fits so well with Christmas supper that it’s worth it to me. And honestly, as iconic and complicated as the crown roast looks, it really is easy. The title is truth in advertising: Simple Grilled Crown Roast Recipe. Now slice the crown into smoky, savory, and juicy pork chops and serve. 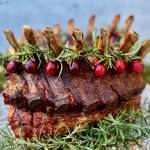 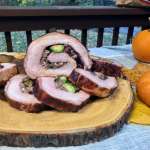 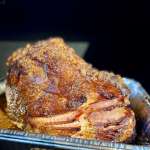 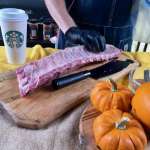