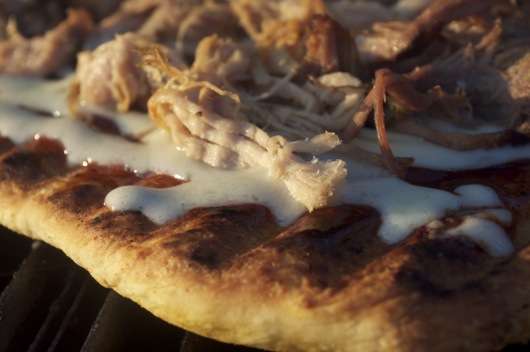 I know that there’s no Grillin’ Fool out there that ever has left over pulled pork. That you follow the instructions from the pulled pork recipes we’ve posted here and nobody leaves a single scrap of porcine perfection behind to be used in say chili or maybe on a pulled pork pizza. Your guests devour every morsel leaving none to freeze for later. Lucky for us in St. Louis, we can cruise to either SugarFire Smokehouse and pick up some of the best BBQ in the country. If you happen to have a little left over, you only need 4-6 ounces to make this fantastic pulled pork pizza.

Pull the dough out of the fridge and let it come up to room temperature.

Start the grill, for two zone grilling, with a grate temp between 450-500 degrees.

Then spread the flour or corn meal (I used flour in this recipe) on the cutting board and place your palm on the flour to coat your palm and fingers before taking the dough out of the bag or it will stick something serious:

Now remove the fresh dough from the bag and set it in the middle of the flour on the cutting board and roll/knead out into a pizza crust:

Now brush the pizza crust with one tbsp of olive oil and then dust with 1 tsp of the rub:

Now to the grill that should be north 400F, in this case a gas grill but a charcoal grill would work. I picked up the pizza crust from the corners farthest from me and placed it oil/rub side down right over the hot grates:

Then I brushed the second side with oil and hit it with some more rub:

Keep a close eye on the crust. Don’t go grab a beverage or relieve yourself of the last couple of beverages or this crust will burn quickly. When it starts to bubble on the top it should start browning.

Once the crust starts browning a little, I rotated the crust 45 degrees:

After the pizza crust browns all the way across, remove it from the grill and place it browned side up on the cutting board:

Apply the BBQ Sauce, in this case Blues Hog BBQ sauce (one of my faves):

Some of you are wondering what exactly is Provel cheese:

Well, it’s a combination of cheddar, Swiss and provolone that is the traditional cheese on St. Louis style pizza (which is a whole other discussion on what exactly is the pizza style here in St. Louis). It’s got a great buttery flavor that complements the sweet and salty of the rub, the sweet of the BBQ sauce and the savory of the pork. If you can’t find Provel, feel free to use a combo of provolone and cheddar at about a 2-1 ratio.

Put 4 oz of the Provel over the Blues Hog:

Back on the hot side of the grill:

After only five minutes the cheese on the grilled pizza is melting wonderfully:

I rotated the grilled pizza to make sure it grilled evenly and checked the bottom frequently for browning. When it looked like this, about three minutes later, I slid it to the cool side of the grill:

For all the other grilled pizzas I’ve done recently, I did them all over high heat. Why the two zone grilling for this one? Well, because the pulled pork was cold. All the other pizzas had toppings I cooked on the grill right before I grilled the pizza or smoked salmon and the prosciutto that only need to be warmed a little considering how thin those ingredients are. I wanted to make sure the pulled pork pizza was good and hot all the way through.

After another 6-8 minutes, I pulled the pizza over to the cutting board:

Toasting the crust on both sides really makes it crunchy, and the BBQ rub make it very reminiscent of BBQ potato chips. Well, BBQ potato chips topped with savory sweet Blues Hog BBQ sauce, buttery Provel cheese and succulent pulled pork from SugarFire. For a Grillin’ Fool such as myself, that’s about the most perfect grilled pizza I’ve ever have!

If you have any questions about the pulled pork pizza recipe above or have your own pizza recipes, feel free to leave a comment below or shoot me an email. 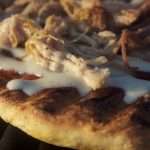 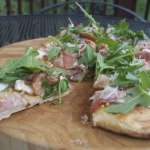 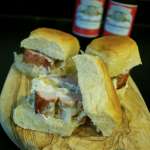 How to Smoke on a Gas Grill 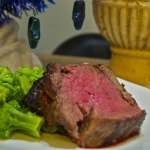 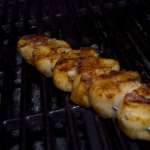 I can hardly wait to grill your Pulled Pork Pizza. Doing a butt on Thursday. Will probably do the pizza on Saturday. What rub do you recommend? I make an All-Purpose BBQ rub with 14-16 ingredients…