Let’s face it, you’re intimidated by `. I am too. Can’t cook them too rare, although medium rare is OK nowadays according to the USDA, but still the window of getting them perfect is pretty narrow compared to most other meats. Go a little too long and tthey’re hockey pucks. Just ask my dad! When I brought my future wife home for the first time for dinner with the folks, well, let’s just say he missed the window! I didn’t know if I should eat mine or try a wrister through the five hole. If you don’t know what that means, ask your hockey friends. I promise you It’s not dirty.

I have a pretty foolproof way of making grilled pork chops perfect every time. Speaking of time, I saved myself some by using Smithfield Pork, Garlic and Herb Pork Loin Filet and sliced it into pork chops myself:

Sure, it took about 10 extra seconds to slice the pork loin into chops, but it saved me from having to come up with a marinade the night before because it was already marinated with garlic and herbs. How could I go wring?

You read that right. Just three ingredients. This is more about the method as well as saving time without sacrificing flavor.

Start by carving off some thick chops. Carve as thick as you like, but for this method they need to be at least an inch thick:

Next up, simply dust the flat sides with a little salt and some fresh cracked black pepper.

Now head out to the grill and prepare it for two zone or indirect grilling. For a standard grill, that means charcoal on one side and the meat on the other. If you’re lucky enough to have a kamado or ceramic grill, that means the plate setter needs to go over the fire to direct the heat away from the meat. Don’t forget to add some smoke wood. I used apricot.

Target temp inside the grill is 275F. Then place the pre-marinated, and now seasoned chops, on the grill above the plate setter in a kamado or on the side of the grill with no heat if using a standard grill:

So I have to own up to a mistake here. That’s only 2 chops. Well, I was slicing the loin and realized I cut the first couple a little thinner than I wanted. I was chatting with my dad as I was cutting. So I cut these last two thicker. To make sure all of my reverse seared pork chops are finished at the same time, I put the two thick ones on first. After about 3-4 minutes, I added the next two chops that were a little thiner and a couple minutes after that I added this last one that was thinnest of all:

You could remedy this juggling of times by simply paying more attention than I did.

Back to the grilling. Close the lid and wait. We’re looking for a target temp of about 130F-135F on these. At 275 Fdegrees inside the grill, that doesn’t take long. Maybe 15-20 minutes. I checked with instant read thermometer and saw the thick ones were at 135F:

Remember me talking about that foolproof method of making the perfect pork chops every time? That’s it in the picture above. An instant read thermometer. Don’t tell me you don’t need one. Quit guessing and know the temperature of what you’re grilling.

Again, back to the grilling. Take the pork chops off and remove the grill grate and the plate setter (very carefully as they will be wicked hot). On this grill, I have another grill grate right down by the coals that holds my plate setter. This gives me some wicked good grill marks as the meat practically sets on the coals:

And here are those same pre-marinated, reverse seared pork chops from another angle:

Now plate and let rest for a couple minutes before slicing:

Why the reverse sear?

Why not sear first and then smoke? Because searing the meat will keep it from taking on much smoke flavor. Meat will only take smoke flavor until the outside reaches 140 degrees or so. Searing takes it way past 140 on the outside. By smoking first, the pork chops get infused with the smoke and then I get that wonderful flavor crust from the caramelized proteins after searing. It’s a win win! By the way, I also smoked the potatoes and grilled the corn. You can see my smoked, baked potatoes here.

But how did I do? Were the pork chops juicy? You tell me:

Full Disclosure ~ Smithfield provided the GrillinFools product and compensation to do this post. But as you know, we wouldn’t put anything on this site that isn’t really good and this pork roast was outstanding inside and out. Save yourself some time and add a bunch of flavor to your next barbecue and give one of these a try. 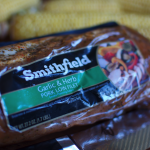 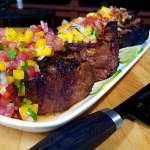 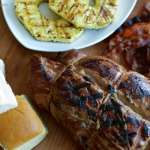 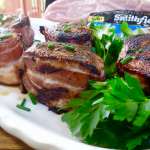 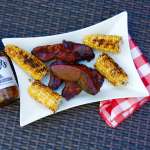 What are Country Style Ribs and How Do I Grill Them?

I tried the reverse sear technique last night and WOW! The only difference was that I used a dry rub instead of a marinade. The pork turned out absolutely perfect. When the Mrs. as well as a five and seven year old ask for more, I know I did something right.

Smoked and seared on my WNK gas grill from MHP.

Glad to know it worked out so well. I reverse sear almost everything now!