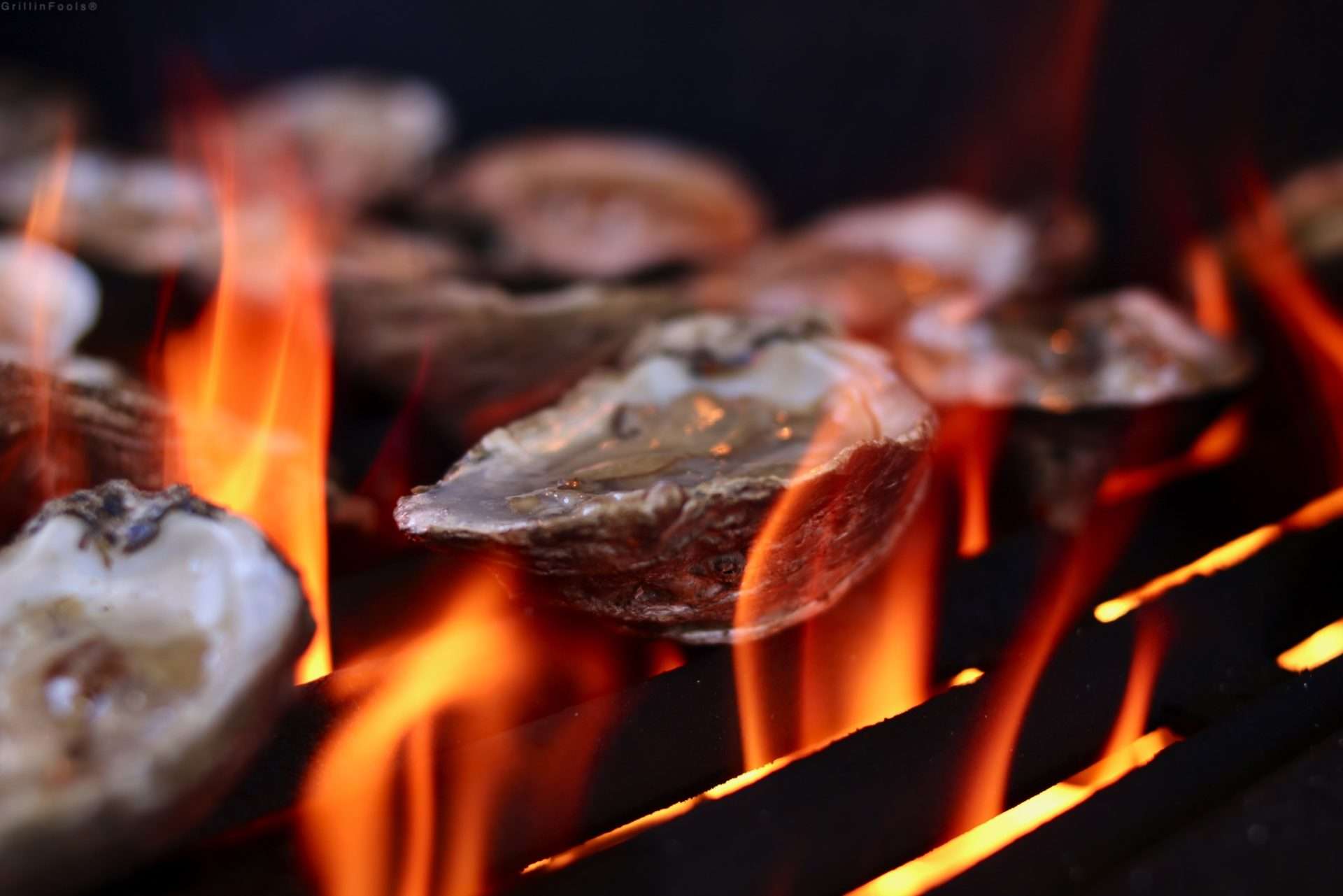 I can personally attest that God has a twisted sense of humor. Sure, I could cite things like the platypus, male pattern baldness, or the game of golf as prime examples, but I will go a step further. God gave me an absolute, over-the-edge, off-the-chain, full-blown, seafood addiction and then stuck me smack dab in the middle of the country, about as far away from good seafood as one can possibly be. Sure the catfish, bass and crappie here in the midwest are fantastic, but I can only do so much fried fish. So when I was able to procure 4 dozen FAT Maryland oysters recently, I decided to indulge my addiction. I made two different char grilled oyster recipes and would’ve done a tutorial on slurping them raw (with all sorts of different accoutrement options), but they were so large that nobody wanted to do them raw. But the big ones are PERFECT for grilling, so away we go.

What we can be certain of is that oysters are extremely rich in zinc, which is essential for testosterone production and maintenance of healthy sperm. Oysters also boost dopamine, a hormone that increases libido in both men and women.  Zinc is an essential nutrient found in cells throughout the body. The National Institutes of Health note that Zinc deficiency can cause delayed sexual maturation, impotence, and hypogonadism in men which makes oysters perfect if you are looking for a natural boost in testosterone production and combat a testosterone deficit condition. .

Let’s begin with getting the right equipment. A nice oyster shucking knife is a necessity. A shucking glove is not a necessity, but if you’ve ever slipped with the seemingly dull shucking blade, you will wish like hell that you had bought the glove:

I know this because I ordered a dozen at Hooters one time and was delivered a bucket of unshucked oysters. I’d always gotten them shucked whenever I had ordered oysters anywhere else. I had no idea what I was doing, so I got after it and learned a quick and painful lesson about those “dull” shucking knives. With enough force behind it, even a dull shucking knife can rip through skin. Let us help you here and save you some searching. Here’s a link to a glove that has amazing ratings and is less than $10. And here are a pair of also highly rated shucking knives that are less than $10/knife.

Let’s cover the ingredients and then get to having a shucking good time!

3 dozen of your preferred oysters, shucked
2 sticks of salted butter
2 cloves garlic, minced
1 tbsp cajun seasoning
6-10 squirts of your favorite hot sauce
1 lemon, sliced in half (a lime would work too)
1 cup of freshly grated cheese (we used asiago but parmesan or romano would work just as well)

To shuck the oysters, realize that the two spots you need to pop are near the hinge in the back and then the flat part where the two sides of the shells come together. Start off by getting that shucking knife into the the hinge near the back:

Then once you pop this section (and you will know when it pops) slide the knife around and pop where the two sides of the shell come together and pop that by simply twisting the wrist and making the blade go sideways:

And once it is open, use the knife to separate the meat from the bottom shell to make it easy to eat later:

Now let’s mix up the picante part of this Oysters Picante recipe.  So we will mix up most of the rest of the ingredients and get these bad boys on the grill.

Drop the butter, garlic, cajun seasoning, and hot sauce in a small pot and melt and blend through:

And if you are wondering how we came up with the name. Well, picante means spicy and these had a little kick. And when you add the adjective after the noun, it really makes it seem like we have our shit together. Boom! Oysters Picante.

Now let’s get the oysters on the grill. We went with medium high heat:

Back to the recipe. Simply stir up the butter concoction and drizzle some over each oyster. Now you might picture it simply pouring on like this:

But in reality it is likely to be more like this:

**So this is your official disclaimer. Be careful when pouring the butter as this stuff flames up hard. I got two blisters shooting this with our videographer**

Once the oysters begin to bubble (boil in their shells), if they were small oysters, they would be just about done:

These were monsters, so I had some more time which was perfect for me to apply a pinch of cheese to every “erster” shell.

Then hit them with a little lemon to add some acidity:

With as huge as they were, I let them bubble for a couple minutes before removing them from the grill and plating.

And here we have a nice little appetizer:

How big were they?

If they aren’t done enough for your liking, place them back on the grill for 60 seconds.

These were absolutely magnificent. We only had a handful of people here and we destroyed ALL of these in short order. I could eat these twice a week if I could afford it. 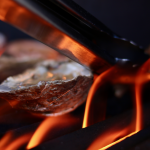 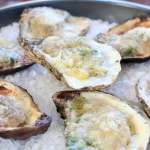 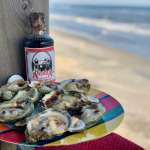 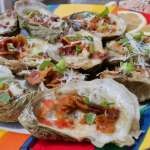 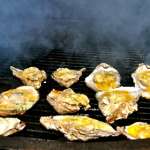