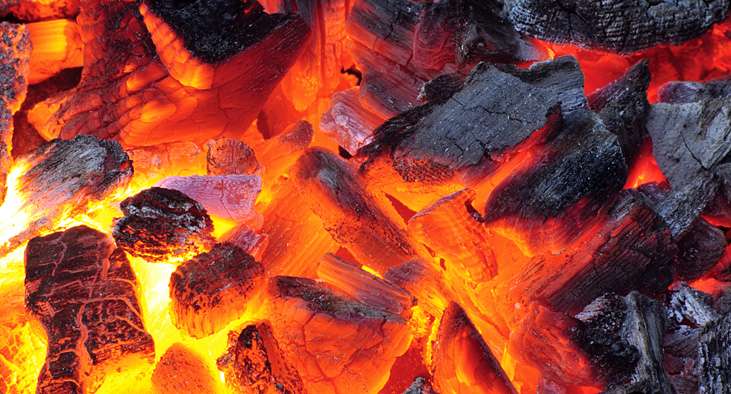 At one point in my life I was the biggest charcoal snob on the planet, but that was pretty misguided on my part. I wasn’t picky about the type of charcoal or the brand, just that it was charcoal rather than gas. I felt like gas grilling was the equivalent to hauling the stove out to the patio. Now that I have kids and no time during the week for long cooks anymore, gas grilling is something I do often. But the funniest part about me being a charcoal snob back then was that I didn’t care what kind of charcoal I used. In fact, for the most part I used the cheapest stuff I could find. So I was dogging the gas grilling folks because of their fuel source while using a terrible fuel source. See most briquettes use all sorts of petroleum products to hold the little bits of charcoal together to form those somewhat uniform briquettes. That stuff does not smell or taste good. Charcoal should look like this:

When I got my first kamado grill I went solely lump. About a nine months later the other Grillin’ Fools and I were doing a grilling class at a local grocery store. Since they didn’t carry lumo, they asked if we would use a charcoal they carried and we obliged.

So we loaded up the grills with briquettes and dad went to work with the lighter:

Yes, I realize that dad is lighting that charcoal inside. This is a HUGE no no. Never, ever light charcoal inside. The two grills we were going to use were each to be placed under massive, industrial vents and we consulted a fire captain who said that this would be fine. Well it wasn’t fine. The vents couldn’t keep up with the smoke and the room with 20 foot ceilings began filling with smoke. Nasty, nasty smoke. I had no idea how bad the briquettes smelled until we lit them inside after using lump exclusively for close to a year.

So what contributed more to me noticing the difference? Was it the fact that I hadn’t used briquettes in so long or that the charcoal smell was concentrated in an enclosed space. I’m not sure it really matters. Some of you think the enclosed space was the bigger issue and that you grill with those briquettes outside so it won’t make a difference to your grilled eats. Maybe. But realize that when you close the lid on your grill, the smell is in an even more enclosed space and concentrated around your meat. That’s not a recipe for a great cookout.

It’s time to become a charcoal snob. But do so with good, lump charcoal. Skip the petroleum pressed briquettes. And when you do go lump, there are a couple things to look out for. If you buy bag after bag that is full of tiny bits of charcoal, find another brand. It might happen every now and again, but if it happens all the time, switch brands.

If you light lump charcoal and it looks like a you’re celebrating 4th of July early (or late depending on the time of year) stop using that brand of lump. It’s full of crap wood that sparks like this:

That picture above was taken on deck after I sparked up (see what I did there) a chimney full of charcoal from a major discount warehouse chain. This happened every time I lit this brand of charcoal over multiple bags. At first I thought it was really cool and would wait till close to dark or dark to light it up just for the show. But then I realized while I was saving a couple bucks per bag, and getting a nice pyrotechnic show, I was going through bags way too fast.

We prefer our home town Rockwood lump. It’s made with all Missouri hardwoods. Find a great lump charcoal and don’t ever turn back:

Is lump charcoal really that good?

Well first, as I have explained, it smells a lot better. But that’s not the only reason it’s so good. It also produces a LOT less ash than briquettes. This may come as a shock, but I grill quite a bit. One would think I would have to clean out my grill at least once a month. How about 2-3 times a year. I’m not kidding. With so little ash I rarely have to clean out my grill.

Sure lump charcoal costs a little more, but it also lasts longer (in my opinion) than briquettes. I haven’t tested this scientifically, but I find a load of lump lasts through more cooks than briquettes. I think it has to do the lack of ash meaning it has more of the stuff you need to keep the grill hot and less of the filler.

Spend a little extra money to get charcoal that burns cleaner, lasts longer and has less mess to clean up. Also, if you are a kamado grill owner, it’s practically mandatory as the petroleum products from the briquettes mess up the seals on those grills. That statement alone should get you to use lump. If briquettes mess up grill seals, what do they do to the food?

Trust me, if your charcoal doesn’t look like this, I would recommend switching things up: 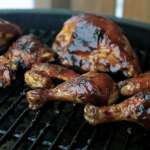 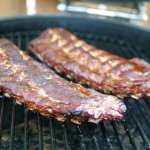 How to Make Fall Off the Bone Ribs 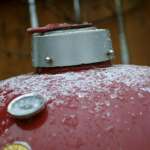 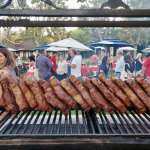 I haven’t had the chance to give Rockwood a shot yet, but I’ll be sure to look out for it next time I’m at the hardware store. I still have a few bags of Royal Oak sitting in the garage that I got a killer deal on at Home Depot – their price matching policy cannot be beat!

What is your favorite charcoal?

Thanks, Curt, but not all of them were mine. Got a couple from Rockwood.

I stumbled on Rockwood from a small mom and pop meat market in the Fenton area. I previously used Royal and the BGE brand (free bag). All three worked out nicely. The Rockwood is selling for about $3.50 less per bag so I grabbed it and haven’t looked back. I met the Rockwood owner once delivering bags of charcoal from the back of his trailler. Great guy and great success story.

Off to buy some Rockwood now — spring calls! Let’s hope the Rockwood “where to buy” map is up to date!

I hope so too! Love that stuff….

I found a brand called “Stubbs”. It’s 99% charcoal and 1% veggie oil as a binder. I do like lump, as well, but can only get royal oak, the red bag brand….

Yeah, give me the Stubbs over the red bag…

Really? You say Stubbs over red bag Royal Oak? Why?

I’ve been meaning to give Rock Wood a try but I have no complaints so far with the red bag Royal Oak.

I’m not saying that Royal Oak is terrible. I just like Stubbs. It’s like asking, “Who do you prefer, Brett Favre or Dan Marino?” I prefer Favre, but that doesn’t mean Marino is a bum. Pick what you like and go with it. With that being said, if asked the same question, which charcoal is the best of all time, Rockwood leads the bunch. Doesn’t mean all other charcoals are terrible, but the best of the lot is Rockwood.

[…] Is Lump Charcoal Really that Good? – I wouldn’t want to be considered a charcoal snob but this article makes a pretty good case for it. […]

Great post Scott, have been using rockwood sometimes in my green egg, but lastly i prefer quebracho lump from the harder charcoal brand. has way longer burning time and burns hotter.