But for me, this is comfort food in which I dream of it being warmer. And when I’m done the warm, toasty buns with all that glorious reverse seared pork tenderloin, grilled pineapple, melty cheese and crispy bacon stuffed in the middle, will feel like comfort food with that Caribbean feel. Don’t miss the pro tip at the end to keep these sliders warm.

I used pre-marinated Smithfield Pork Tenderloins for this:

And of course I used Teriyaki flavor which melds so well with the Hawaiian theme.

I’m a huge believer in brining and marinating. Adding the flavor before the meat ever hits the grill is a one way ticket to Flavortown. Hell, it’s a lifetime pass to Flavortown. And buying these pork tenderloins pre-marinated saves me a bunch of time as Smithfield took the time to slow marinate the fresh pork and vacuum wrap it for me. Sure it might take only 20 minutes to whip up a marinade, but I prefer to marinade at least 24 hours. That 20 minutes of work has to happen a day prior. With these pre-marinated pork tenderloins, I can buy it and grill it the same day and still have that robust flavor. With three little kids at home, I don’t always remember to marinate something so this is perfect for me.

First up, let’s make some pineapple rings by skinning that pineapple and coring it. I didn’t make the full recipe here as it was just me so you get the idea. One ring will be enough chunks of grilled pineapple for four sliders. So cut the rings about an inch thick or less and place them right on a very hot grill. If the grill is somewhat hot, the fruit will get mushy before the sugars caramelize and get some glorious char on the outside:

Don’t sweat it if you think there is a little too much char. Here is one side of the grilled pineapple rings that I left on a little too long over a wicked hot fire:

My son ate one of those rings without the slider. He’s six at the time of this posting so no way it was bitter and burnt. Here is the other side:

I would say that anywhere in between would be perfect.

Set the pineapple aside and let’s truss the pork tenderloins together. You can use a handful of separate strands of cooking twine, or use one long piece as I did with this recipe. For a very detailed, step by step, pictorial on how to do this, check out another pork tenderloin post – Jerk Pork Tenderloin.

Remove each pork tenderloin from the package and leave a nice coating of the marinade on them to intensify the teriyaki flavor.

Why exactly am I trussing them together? Because I will be doing a reverse sear. That means smoking and then searing. Pork tenderloin is incredibly lean and dries out fast. By tethering two together, each will insulate the other which means the pork tenderloin can absorb more of that scrumptious smoke flavor before being cooked through. With the reverse sear method, I get the wonderful smoke PLUS the amazing char from a sear. If I do it the other way around (sear then smoke) very little smoke will penetrate the meat after the sear.

So truss the teriyaki pork tenderloins together (fat end to skinny and vice versa) and get them on the grill:

My kamado grill is set up for indirect grilling with a plate setter on the lower rack to deflect the heat around meat and slow down the cooking process to infuse that smoke flavor without drying out the meat. I used nectarine wood for the smoke and the target temperature inside the grill is 275-325.

If you don’t have access to nectarine, don’t fret my friend. The most detailed list of smoke woods and what they pair well with.

Here are my pork tenderloins at about 30 minutes:

And here we are at an hour, which is generally how long you smoke them:

The goal is to take the pork tenderloins to about 130-140 degrees, internal temperature:

Now time to sear. To do this, I took the top grill grate off and the plate setter out so I could get the pork tenderloins as close to the coals as possible:

Sear each side to take the meat above the USDA recommended 145 degrees to server. No you don’t have to grill pork to well done anymore.

Once both sides of the teriyaki pork tenderloins are seared, take them inside to rest for at least 10 minutes and then assemble the sliders.

Bust out the oven (grill) safe pan and place the bottoms of the buns on it followed by a chunk of reverse seared teriyaki pork tenderloin and grilled pineapple:

Make sure to do this over your red photo studio mat to add color to the process and your photos.

Next add the cheese and a third of a slice of bacon to each slider. You are by no means limited to 1/3 of a slice. Add as much as you like:

Now top with the other half of the buns and go back out to the grill. Make sure to set up the grill for indirect grilling again so reinsert the plate setter and the upper grate:

When the cheese melts down the side, you’re done:

Make sure to use proper protective gear when removing the grill grates or taking the oven safe pan off the grill to avoid burns.

Pro Tip ~ Leaving the reverse seared, Hawaiian pork tenderloin sliders on the hot pan will keep them warm while your guests make it through the buffet line:

But how did they turn out? First, we have the Smithfield marinated pork tenderloin which has that wonderful smoky flavor plus a nice sear on the outside to go along with the teriyaki that is infused throughout. That’s under that beautifully charred pineapple, maple and salty bacon, underneath gooey cheese, all in between two warm, sweet Hawaiian buns. Did I mention the buns take in a little smoke and get a little toasted so they have a great crunch which adds to the textures of the slider? I have to say this was definitely a five star recipe. And by buying the pre-marinated pork tenderloins, I saved myself a lot of time and gained all that flavor. Check out another unique slider recipe here.

Full disclosure, I received compensation and product samples from Smithfield for this post, but as you know, I wouldn’t back anything I didn’t absolutely believe in. The opinions expressed above and recipes are my own and I stand by them.

If you have any questions, feel free to shoot me an email. Here’s my email address. 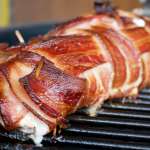 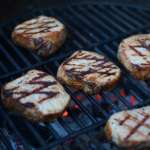 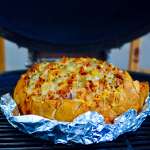