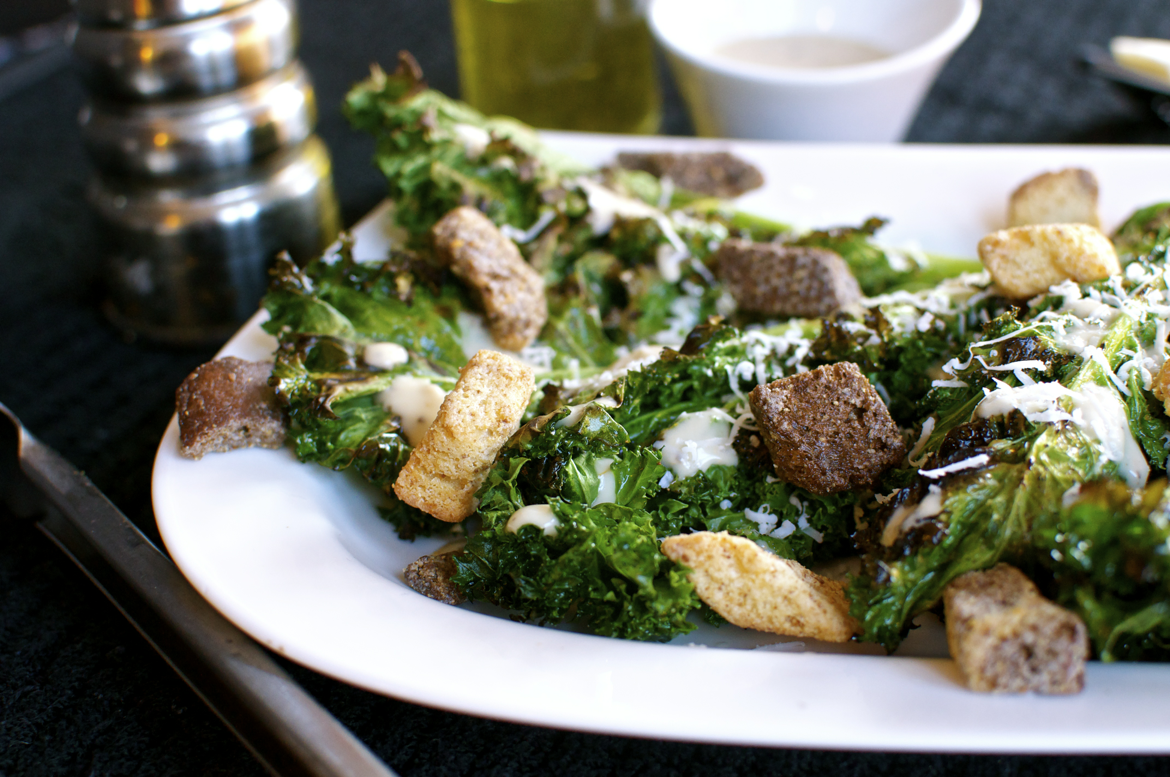 Grilled Kale Caesar Salad? Kale? Really? I know, I know. I’ve been pretty critical of all things kale lately. I don’t dislike kale. I am just tired of all the talk about it. It seems to be everywhere. But there I was at the grocery store and they had kale on the stalk. They never had it on the stalk before this craze, just loose leaves. So despite my animosity toward the kale revolution, I’m here adding to the hype. Forgive me for selling out here. I just thought it looked good. Here’s my twist on kale otherwise known as my kale tale, the Grilled Kale Caesar Salad which is similar to the Grilled Romaine with the addition of the Caesar salad dressing and croutons.

When I bought the kale it looked like this:

The problem with it being so bushy like that is there is no way to char it thoroughly so I trimmed off a couple stalks to get it to lay somewhat flat:

Then I drizzled one side with 1 tbsp of the olive oil:

Once the oil is applied, dust with half the granulated garlic, salt and pepper:

Flip the kale over and repeat on the other side with the oil, garlic, salt and pepper. Here’s a close up of the seasoned kale:

Prepare the grill for uber high heat grilling. Not kinda hot. Not pretty hot. We’re talking lava hot. If the grill isn’t laser beam hot, then the kale will wilt before it chars. So if your grill can’t reach temps of at least 600, then don’t try this recipe. This will work on a charcoal grill or gas grill (gas is what I used here) Place the kale on the hot grill:

Keep checking the underside of a couple of the leaves by lifting the tip with the tongs and peaking under until there’s some char marks before flipping.

***Pro Tip ~ While pushing on a steak or a hamburger that is searing is sacrilege, pushing on the kale is OK. Next time I do this, I might place a cast iron pan on top to flatten the bunch out and maximize the charring***

Flip the grilled kale over after we get some nice char action (3-4 minutes, tops):

Char the other side and remove from the heat. Now don’t dawdle. Serve this immediately after it leaves the grill to get the full effect of how magical this stuff is. I finished this up by cutting off the stalks, drizzling the grilled kale with creamy caesar salad dressing, sprinkling with savory asiago cheese and scattering some crunchy croutons:

How does this compare to our patented Grilled Romaine? It’s not as meaty. The kale has a much thinner and more delicate leaf than a heart of romaine and thus must be eaten immediately. While it’s not as meaty as romaine, it is much crispier. The charred leaves are almost like a tiny, single layer of crispy phyllo dough. If you liked the romaine, give it a try. If you have any questions or comments about the Grilled Kale Caesar Salad, feel free to leave them below or shoot me an email. 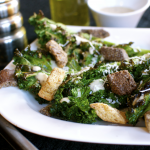 Here’s a collage of the entire process: 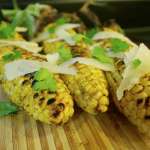 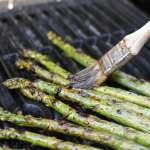 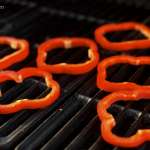 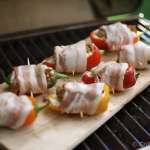