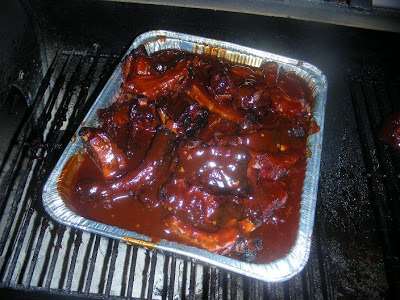 Since nothing says Merry Christmas like smoked ribs, I thought I would share the last time I did a big batch of ribs.

On this such occasion I was at my in-laws. My in-laws like fall off the bone, sauced ribs. Since that is what my audience wanted, that’s what I gladly made. My Father-in-Law (FiL) is the type of guy to get up at the crack of dawn and smoke ribs for 8-10 hours. I just don’t have that kind of time. And I can provide them with exactly what they want in under four hours. That’s right, four hours for fall off the bone ribs….

I peeled the membrane from the ribs and then were marinaded in apple cider, garlic and black pepper over night. Click here to see pics of how to peel the membrane which is vital for baby backs and spares. The next day my MiL made her wonderful Cumin based rub. Cumin, garlic, some brown sugar, onion powder and black pepper. Feel free to use whatever rub you prefer, but if the rub is a store bought brand and the first ingredient is salt, then don’t add any extra salt as I mention below.


I salted the ribs with some coarse salt and then applied the rub and threw them on the my FiL’s sweet Brinkman Offset Smoker. I held back one half slab for myself for a little while so they would not be fall off the bone. Here they are with all of the slabs on the grill: 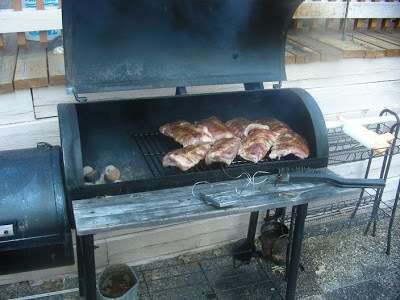 I know some of you are looking at that pic and see that the coals are actually in the cooking chamber rather than the firebox. This was required to achieve my goal of fall off the bone BBRs in under four hours. To do so I needed to raise the temp from the standard 225 to closer to 275. In order to accomplish this I needed the fire in the cooking chamber rather than the firebox. I slid the grill grates over to the right to have easier access to the fire to add wood and more charcoal.

I was having one problem at this point. The ribs were practically stacked on top of each other which would slow the cooking process as they would insulate each other. I had a couple of options, try to transfer red hot coals from the cooking chamber to the fire box (and add a ton more charcoal to get the temp up) or find away to separate the ribs. After a little digging in the garage I found a rib rack. Problem solved: 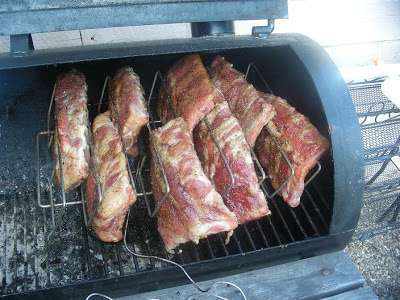 In the above pic you can see the lead from my thermometer that leads to the base (out of the pic). With long cooking chambers like this, the thermometer built into the middle of the top of the grill can be off by more than 50 degrees or so from the ends of the grill. I wanted to see what the temp my ribs were at right near where they were cooking.

After 2 hours on the grill, it was time for the foil. Put the ribs on the foil bone side down, slather with either honey or syrup. For a really great bark add more rub but it’s not necessary. These were getting sauced so no extra rub: 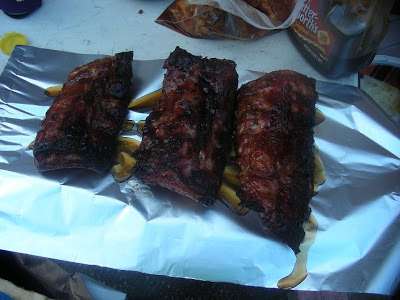 After I took this pic I stacked them on top of each other, folded up the foil around them and back on the grill. After 45 minutes or so in the foil I pulled them, and dunked them in a disposable tin foil pan full of sauce.

The sauce was kicked up Cattleman’s. I took a sauce pan, added some oil, brought some minced garlic up to a sizzle, added some brown sugar and syrup, as well as fresh cracked black pepper. Cooked that for a bit and then added the sauce. I added a half a pumpkin ale and cooked it down for about an hour to thicken.

While I was doing all of this I also threw on some rib tips. Normally I cook those as a chef’s prerogative and enjoy them throughout the grilling process, but these were for my BiL’s girlfriend (now wife) who likes ribs but doesn’t like the bones – rib tips serve this purpose beautifully.

Here are the ribs in their BBQ sauce bath, the tips off to the side and my half slab in foil. I hadn’t gotten to removing my slab from the foil yet: 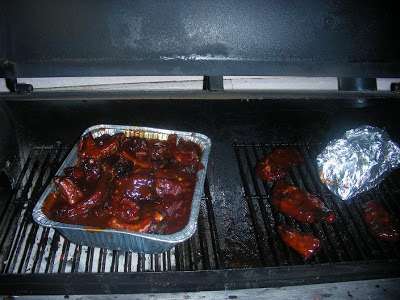 I left the ribs in the sauce for about 30 minutes. So total cooking time was just under 3.5 hours.

This was the second time in about a month I grilled ribs. I didn’t get a chance to do this method the time before as my FiL’s neighbor started the grill up and put everything on about eight in the morning. When we ate at 6 that night, they were great. I kept telling my FiL that I could do the same in four hours.

So there we are, sitting around the table chowing on ribs and sides. After a few bones, my FiL, looks at me and says, “four hours?” After a couple more bones he says it again. All in all I think he said that about 6 times. He just couldn’t believe what he was eating only took four hours.

Now don’t get me wrong. I am not a proponent of rushing anything on the grill. Less time grillin means less time chillin. But I don’t always have 10 hours to grill. Maybe in a Big Green Egg where you set it and forget it, but this method is just as good as the 10 hour method and is a lot easier.

BTW, I did this method with spares about 6 weeks prior. Sorry, no pics. My wife had obsconded with the camera. I’d heard about this higher temp shorter time method and wanted to see if it worked. I did two hours in the smoke and then 90 minutes in the foil. As I was pulling one of the half slabs from the foil, one of the bones hit the edge of the foil that was sticking out and the bone actually fell out of the meat!!! Think about that for a second. How much resistance does tin foil have? Next to none. And the entire bone fell out of the half slab. I almost laughed out loud and was really sorry I didn’t have the camera!?!?

To finish the spares I put them back on the grill for 30 minutes. I realize that the meat was done after 3.5 hours, but I needed to caramelize the bark as they were sauceless ribs. At the higher temp that only takes about 30 minutes. So for spares, four hours is all you need for fall off the bone ribs.

Click here for other Rib recipes including my fave the Apple Pumpkin Ribs. 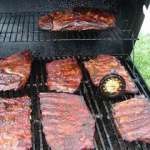 Ribs and a Brisket 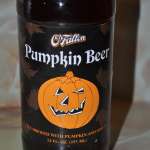 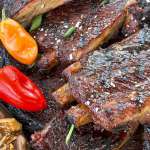 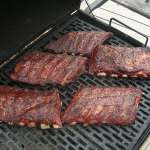