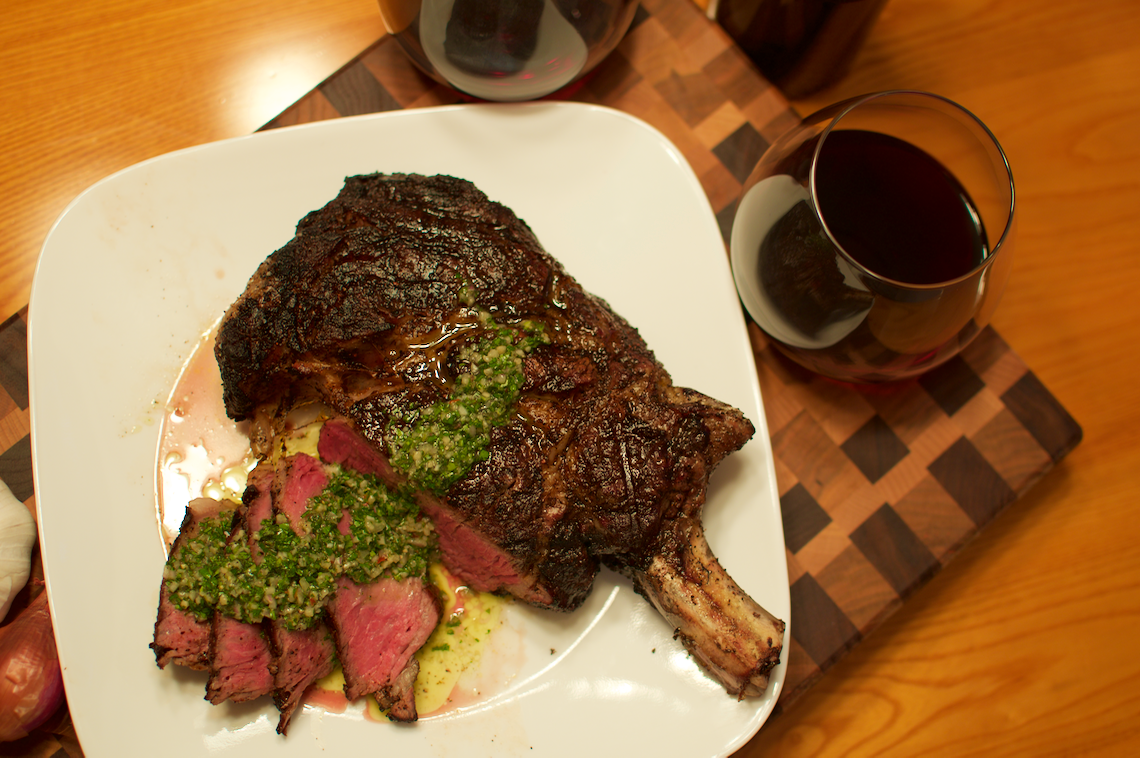 Chili Chimichurri Steak came to me as a combination of this butter basted steak I did inside in a cast iron pan (hey, I can’t grill outside all the time), and my desire to spread some green stuff all over a gorgeously rare steak. Chili and a little cinnamon went into the butter that I basted this steak with and then poured over a little chimichurri and paired it with a wonderful Argentinian Malbec.

But steak just needs salt and pepper? Don’t be that guy

Before we get to the recipe, let’s talk about steak for a second. A lot of people think that a high quality steak only needs salt and pepper. I can get on board with that, but sometimes I want to take it to another level. Basting a steak with chili and cinnamon butter plus pouring chimichurri over it can take a not so great steak and make it spectacular. I decided to go with an already stellar steak and shoot the flavor into the stratosphere. This is a 33 ounce, well marbled, bone in, angus, cowboy rib eye. That’s a mouthful. A glorious, succulent, and delicious mouthful! You know your steak is thick when it can roll over on its side:

It’s also so thick that the outside edges warrant a coating of salt and pepper just like the top and the bottom. You don’t have to go with such a rich (and expensive) steak. This recipe would be phenomenal on a tri tip, teres major, skirt steak and even flank steak.

Now let’s get to the chimichurri sauce. This can be made up the day before if you would like to save some time. Basically combine all of the ingredients other than the steak, butter, chili powder and cinnamon in a food processor and give it a few pulses. Set the sauce aside (makes enough for 4 steaks)

Next up put the butter, chili powder and cinnamon in a small sauce pan and set it on the stove on medium low. You can simply use the butter/chili/cinnamon concoction to baste the steak once the butter is melted, or you can leave it on the stove until the butter turns brown. I browned the butter. Make sure to get the butter off while still brown and not black. It should smell nutty not burnt.

Get the grill ready for two zone grilling also called indirect grilling with hot, hot coals on one side and nothing on the other. We used Rockwood charcoal here.

Slather the steak on one side with the chili, cinnamon butter:

Then place the steak, buttered side down over those magma hot coals:

A little fire isn’t so bad

As you might expect there is going to be some flame action as that butter (and soon enough some fat) hits those wicked hot coals. If there aren’t any flames, then fire is not hot enough. Take the steak off the grill and wait for the coals to be blazing before beginning again. When you see the flames, don’t immediately move the steak. Let it flame sear for a little while before rotating or flipping. Fire is good. Too much fire is bad. Very, very bad. So flame sear in moderation.

Baste the top of the steak with the chili, cinnamon butter:

I rotated this steak after about 2 minutes for those cross hatch grill marks, but with the fire this hot, it was more of an even browning or char which is just fine with me. The more browning the better which is why a cast iron pan makes such a mean steak. After a total of about 4 minutes, I flipped the steak over:

I got a bit of a cross hatch on the other side because I rotated and subsequently flipped it earlier:

As you can see in the picture above, I have my flavor crust but the steak at this point is only about 80 degrees on the inside. Time to move it to the side with no Rockwood charcoal and bake it till I get that massive hunk of steak to a gorgeous rare. Don’t forget to baste with more butter before closing the lid:

I closed the lid for 4 minutes, flipped the steak over and basted it and then closed the lid for another 4. This grill was above 400F degrees. Don’t go by time, go by temp. I don’t take any chances. Not on a steak that cost me as much as this one did so I busted out the Thermapen:

OK, I’m off by 1 degree. It will gain that last degree taking it into the house.

Now spoon over that chimichurri sauce:

That’s it: Chili Chimichurri Steak. The steak on its own, basted in the chili and cinnamon was outstanding. Then layering on the chimichurri sauce made it monumentally great. If I had to use one word to describe the flavor of the the chimichurri, I would have to go with fresh. It seemed like a spring morning was folded up with a summer breeze and placed on my tongue. A little bit of heat from the crushed red pepper and chili powder along with the sweet of the cinnamon and savory of the butter made each bite complex and nuanced. Absolutely wonderful.

A collage of the entire process is below the recipe card. Makes a great Pinterest Pin. 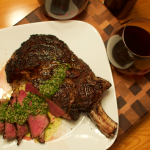 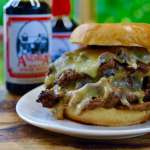 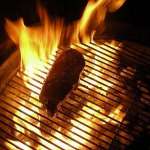 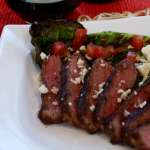 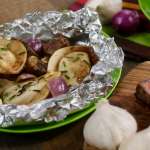 Thanks for sharing Scott, it looks like a proper steack to me! Yummy 🙂