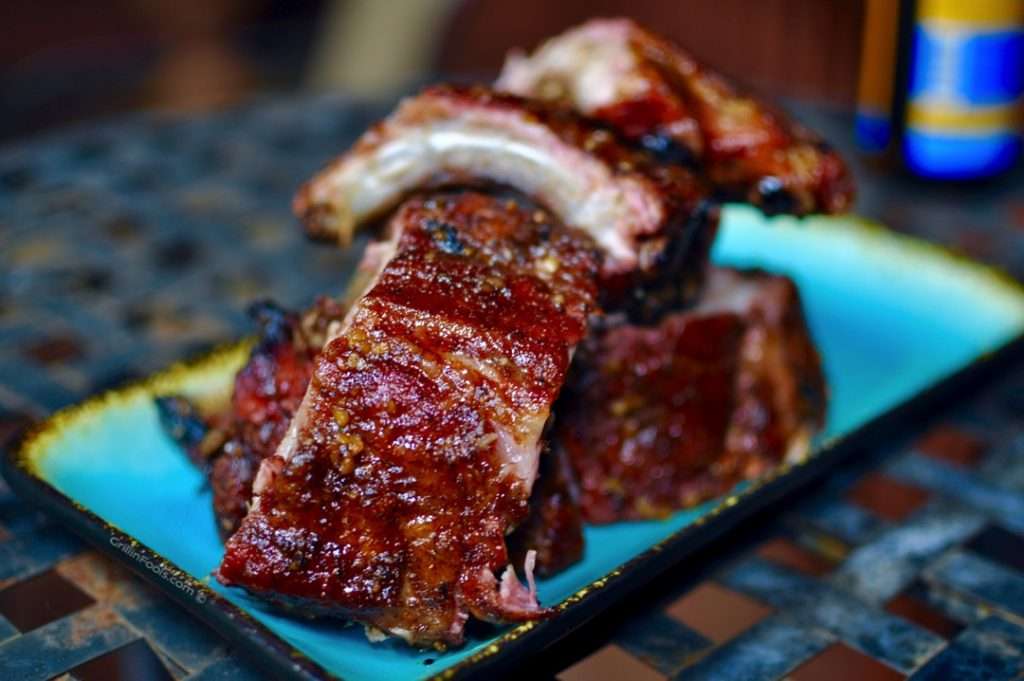 When you saw the title Bacon Pineapple Ribs, you expected to see bacon wrapped ribs, didn’t you? We’ve done that a couple times. Somewhat standard bacon wrapped ribs as well as jerk bacon wrapped ribs. But we aren’t going to be wrapping these ribs in bacon. We’re going to be cooking up some bacon and and then pour the bacon fat into a pot with some pineapple juice, garlic and honey and reduced before slathering that deliciousness onto the ribs. Did I mention I will hit the ribs with some jerk seasoning before they hit the smoker?

Let’s start off with a slab of ribs. For this cook, I only made one slab, but the ingredients are enough for two slabs: 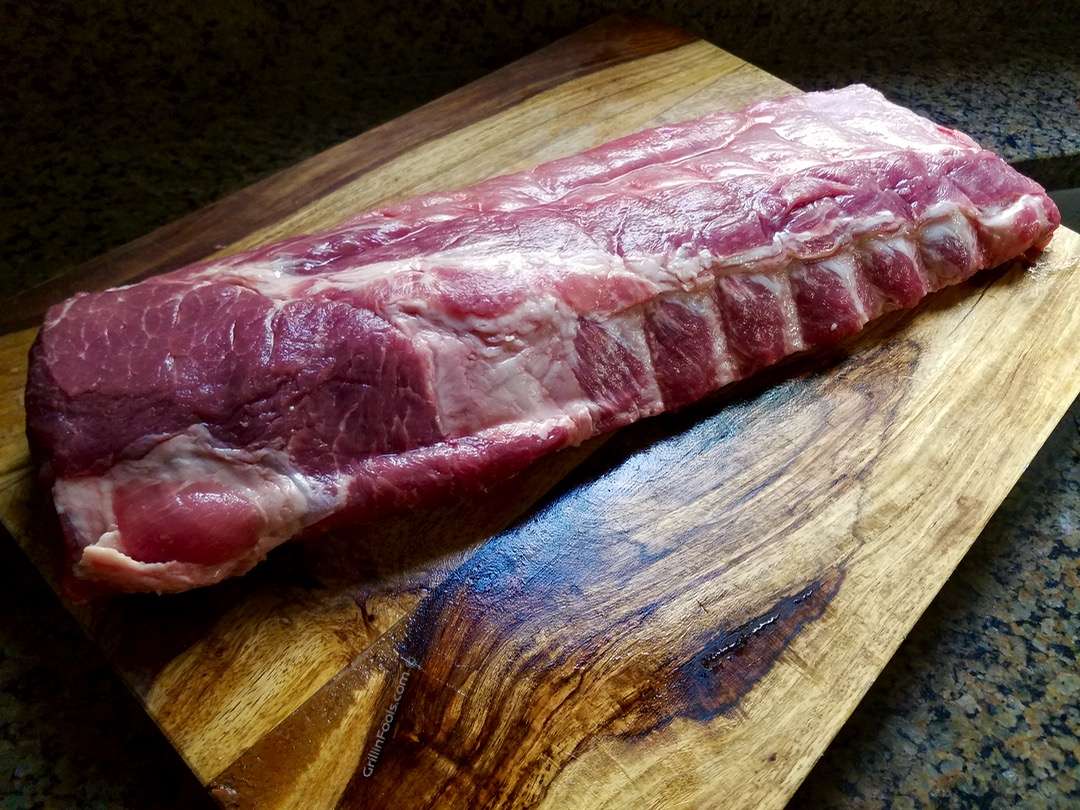 First, we need to skin those ribs. Flip them over to the bone side and peel the thin membrane off the back.

***Editor’s Note ~ Paper towels are your friends. Use a paper towel to get a grip on the membrane and peal it back***

Season the bone side with the salt, pepper and rub: 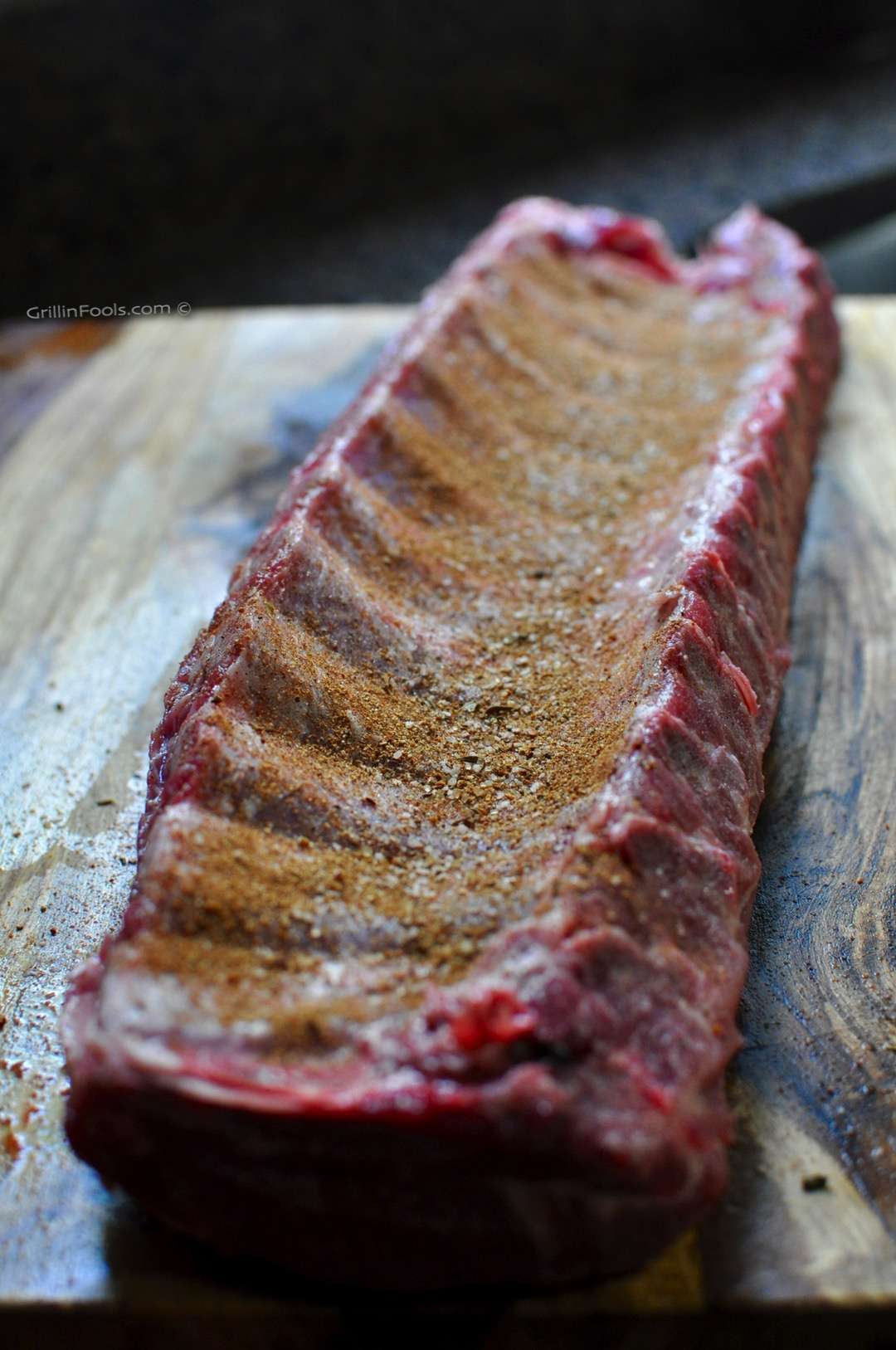 Now take care of meat side: 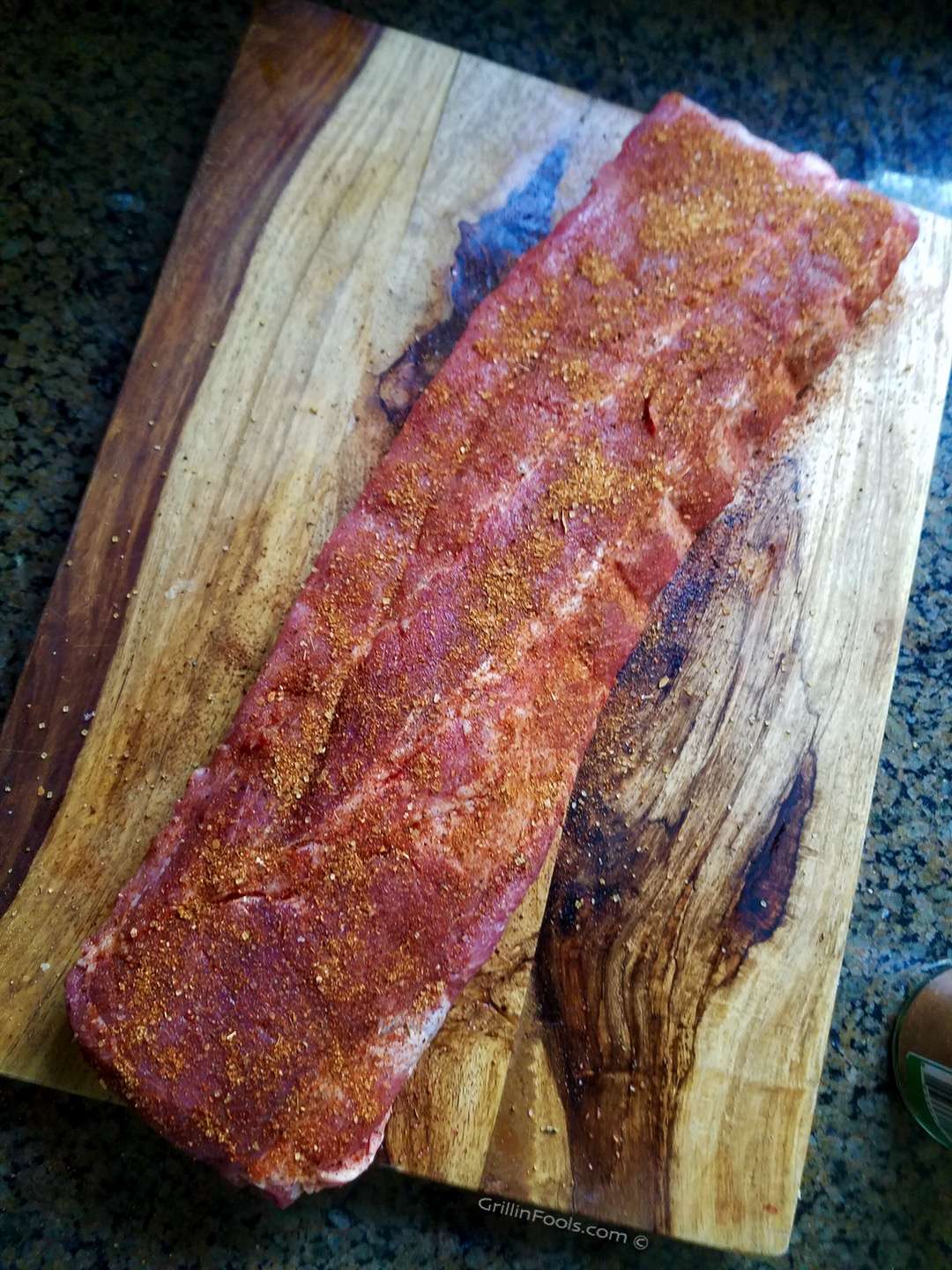 Go outside and start the grill. These ribs need to be cooked indirect which means coals on one side and the meat on the other, in a kamado with a plate setter, or in this case on my Traeger Timberline Wood Pellet Smoker. I set the temp at 300.

As grill heats up, cook the bacon in a pan: 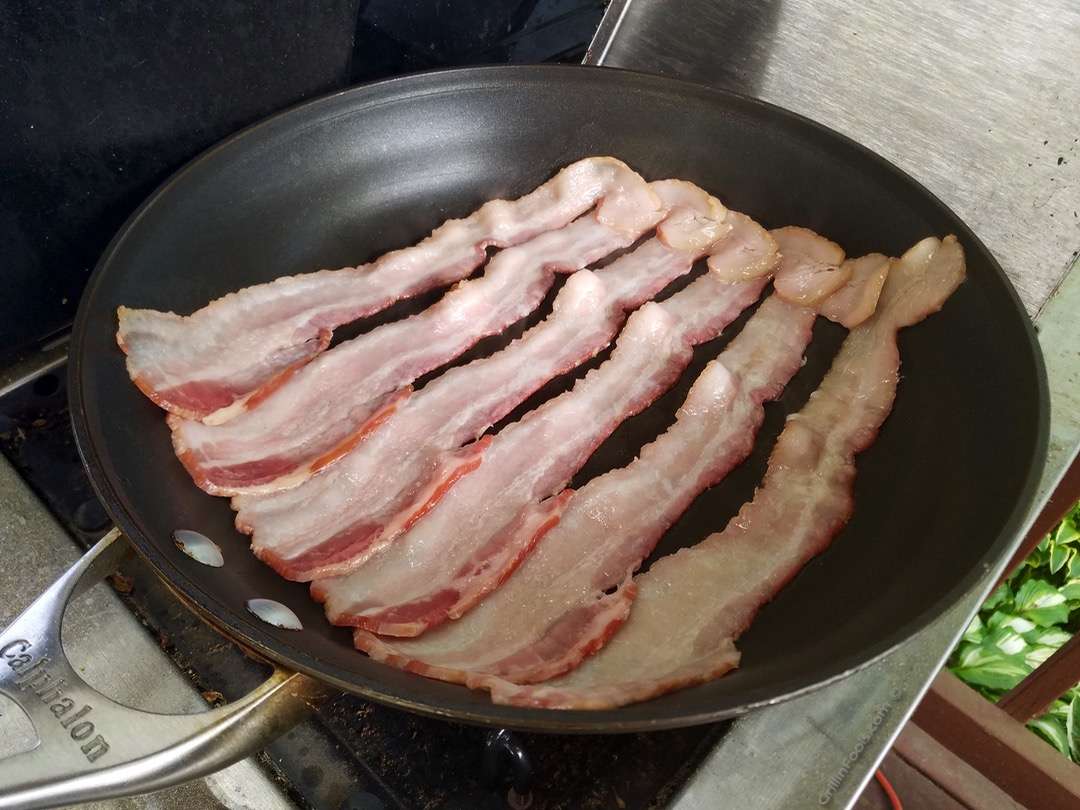 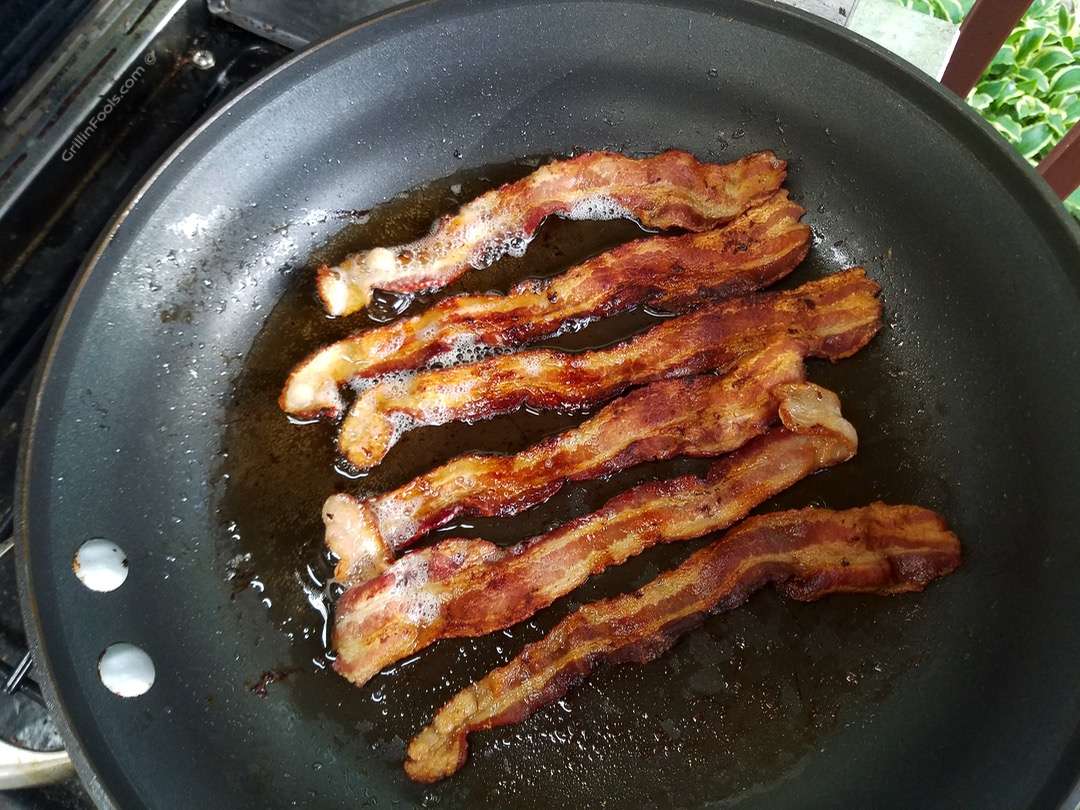 Once the bacon fat has cooled down a little bit, pour the fat into a pot with the pineapple juice, honey and garlic: 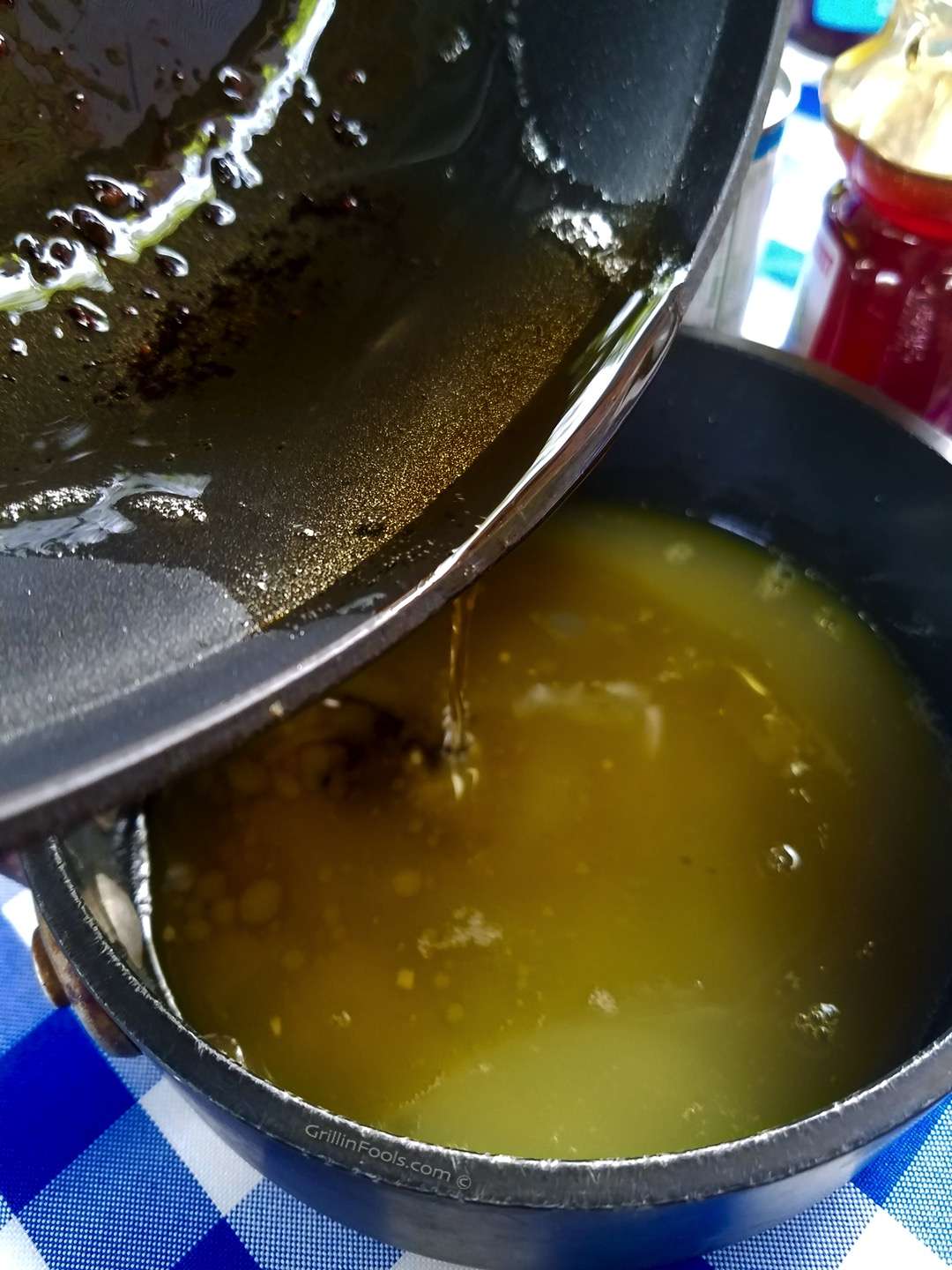 How to grill Bacon Pineapple Ribs: 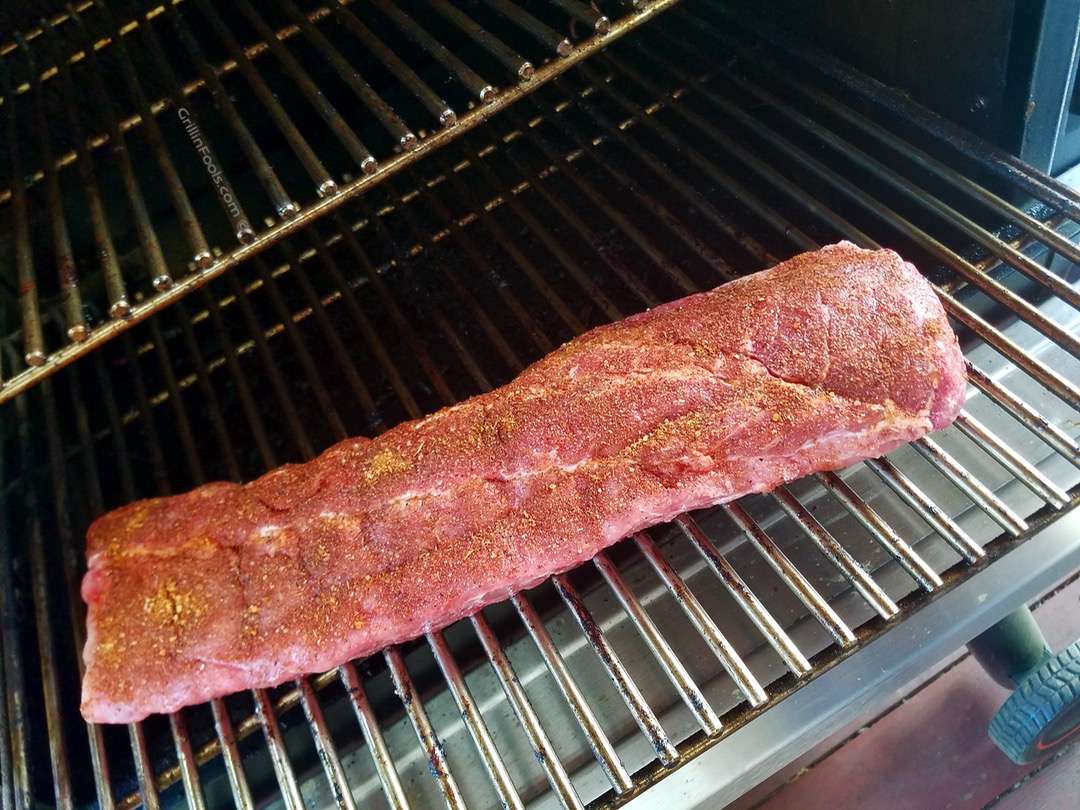 Oh, don’t forget to put the pot with the bacon pineapple slurry in the grill too. We want the slurry to simmer and reduce: 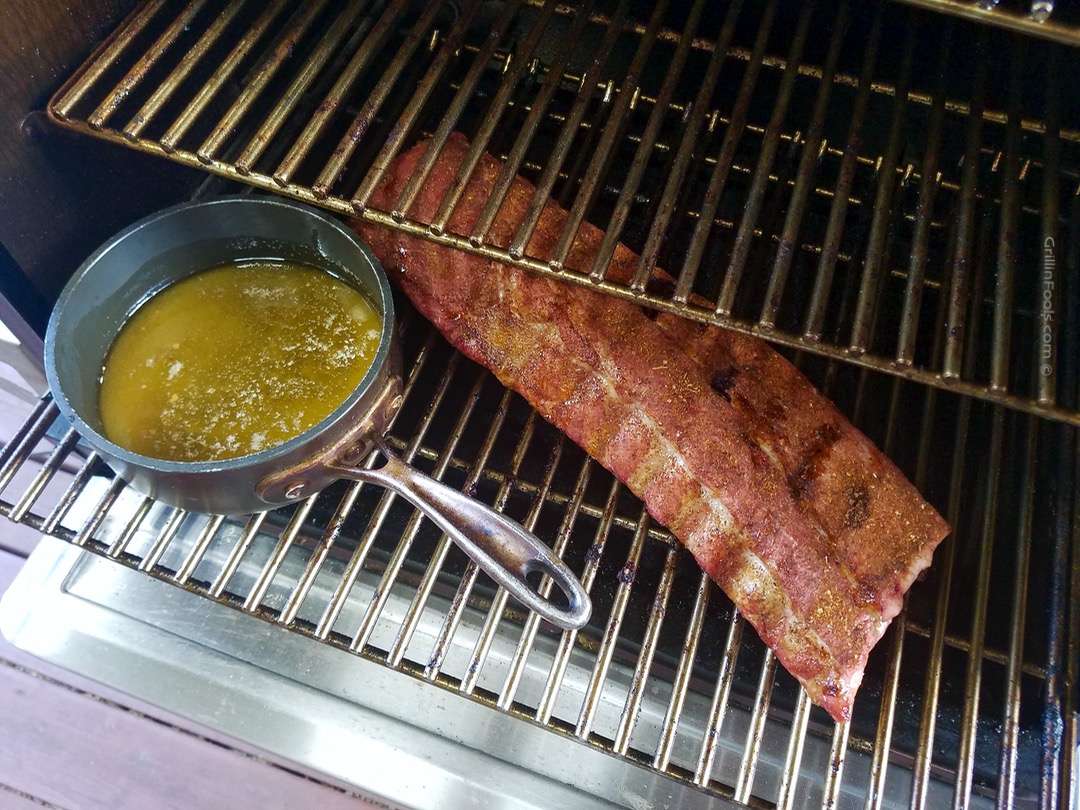 After an hour the sauce will be reduced somewhat and the rub will have melded with the meat. If the reduction were to be applied earlier, the rub would wash off: 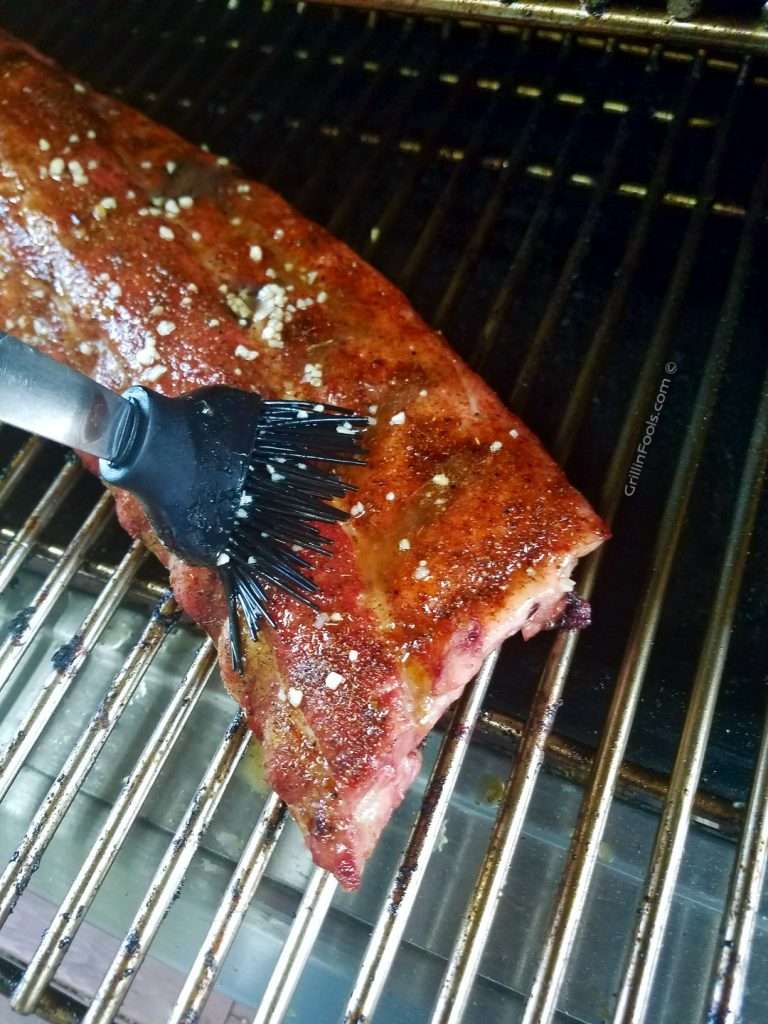 Continue to baste the ribs every 15 minutes.

How sexy does this slab look? 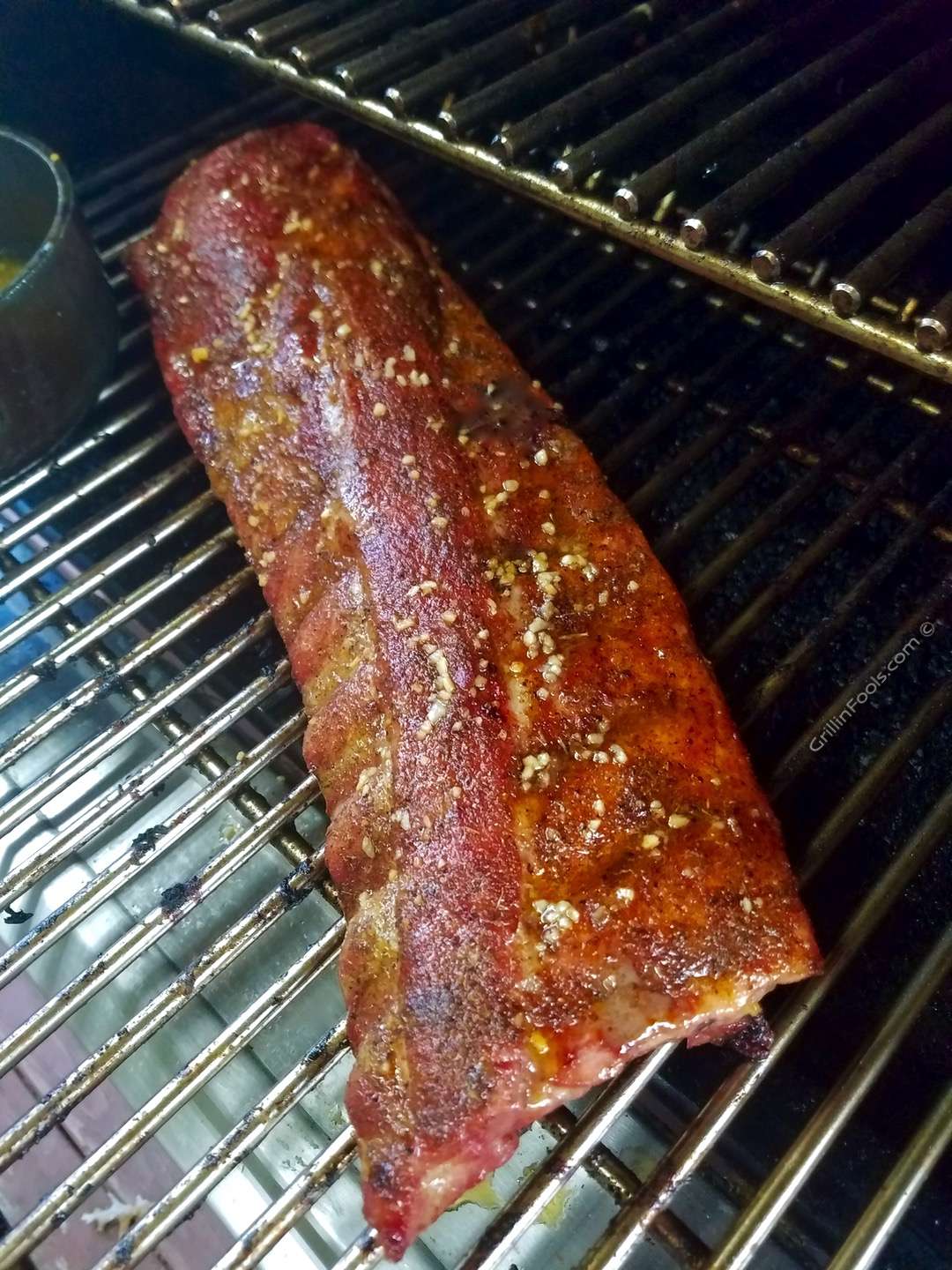 But wait, that slab gets better: 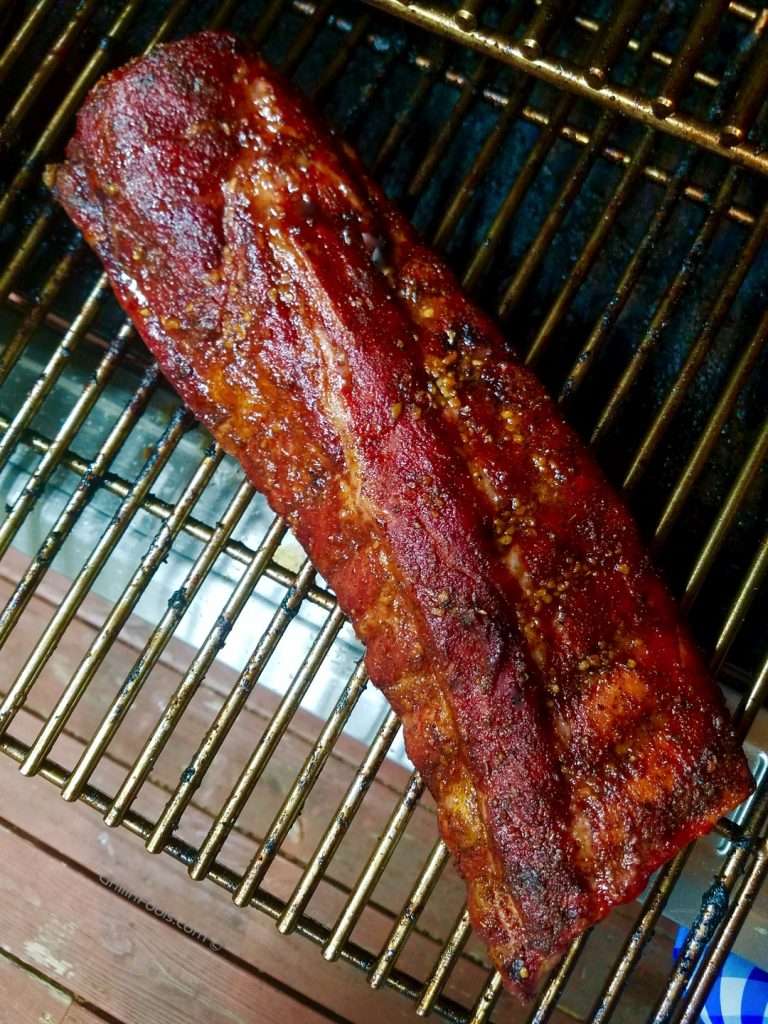 Once the bones peek out 1/4 to 1/3 of an inch, the ribs are done. If you want fall off the bone ribs, smoke for another 30-45 minutes, while continuing to baste every 15 minutes

Time to slice the ribs: 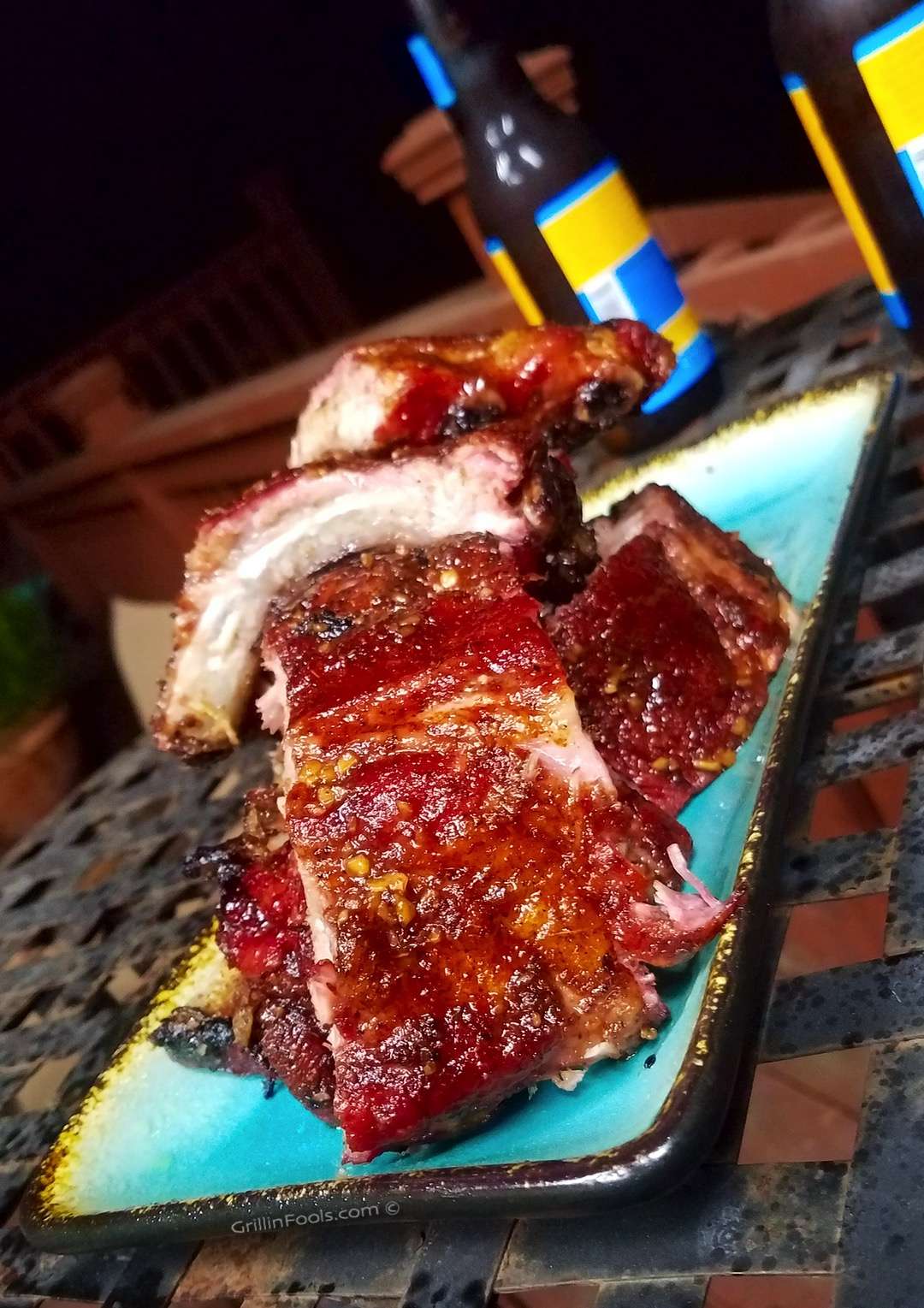 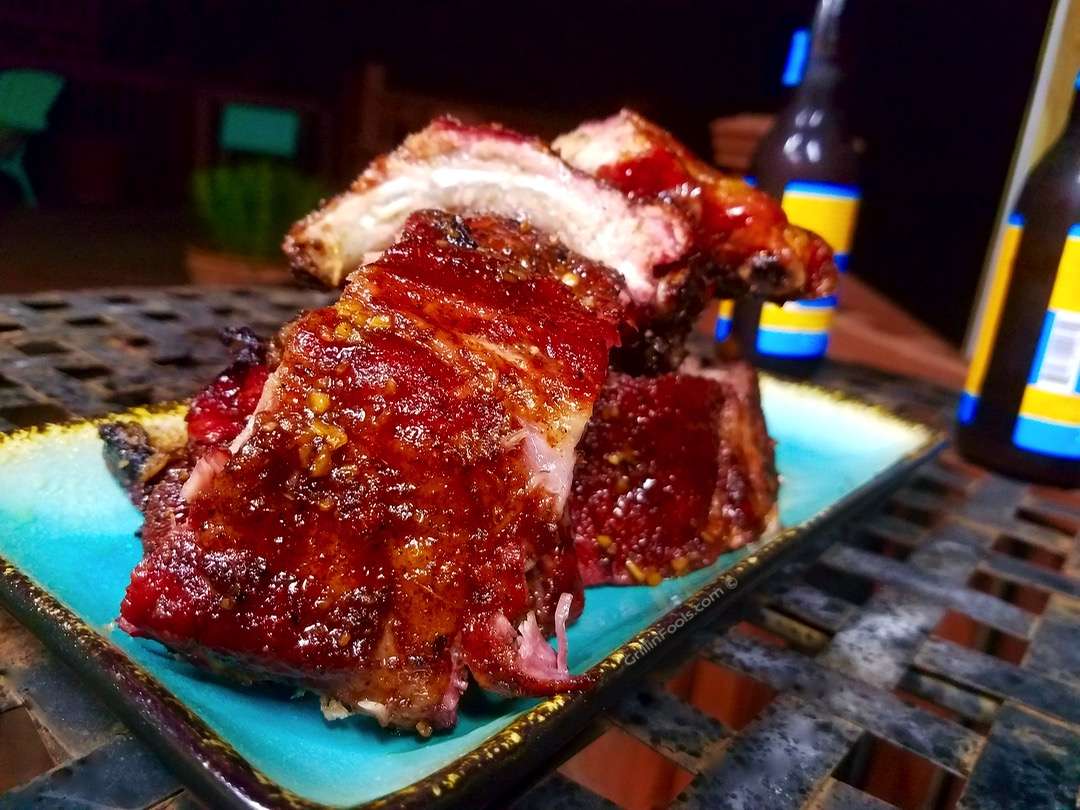 But what about the smoke ring? 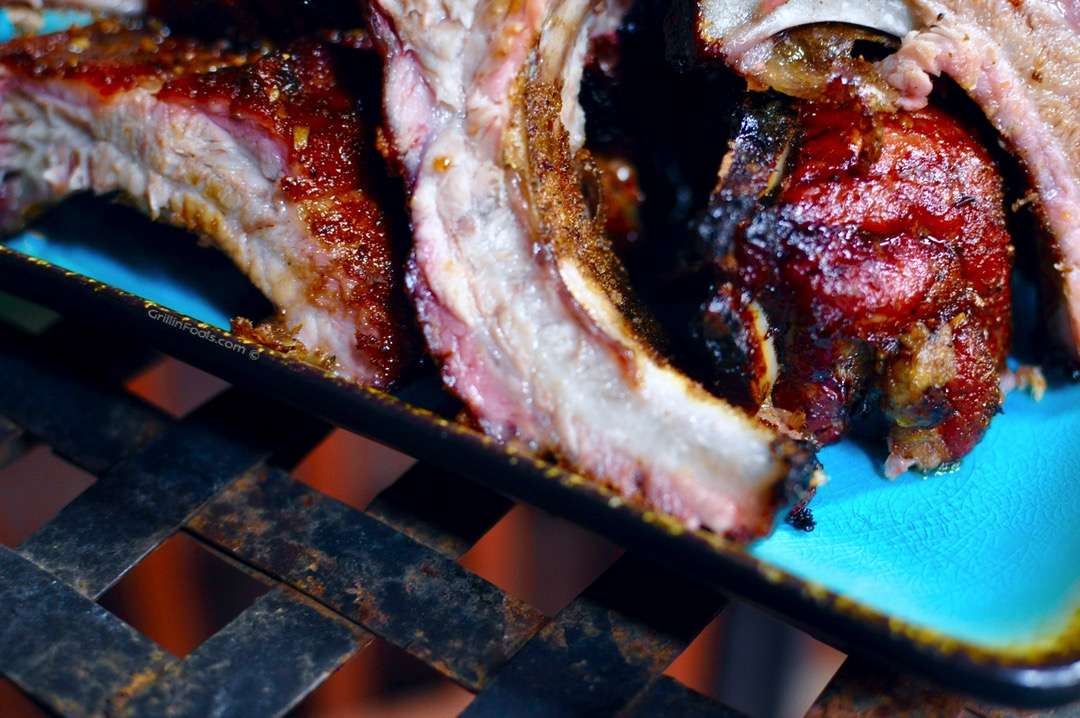 The sweetness of the pineapple and the savory of the bacon counter the hotness of the jerk seasoning beautifully. It makes for a wonderfully complex flavor profile. 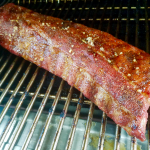 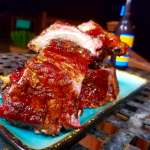 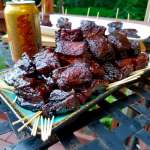 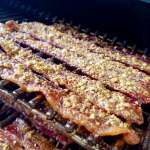 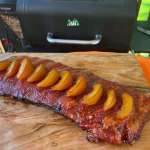