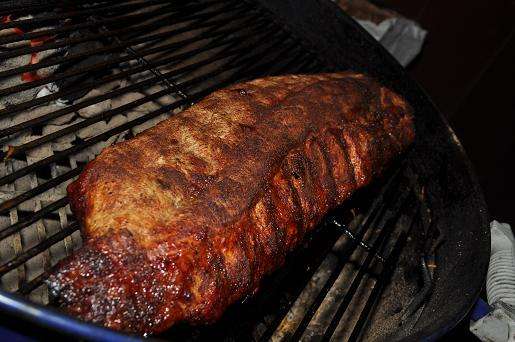 What was the impetus behind this Asian baby back ribs recipe? We used the Chinese Five Spice in a recent post where we made a glaze of orange soda and hot sauce and slathered it on some chicken wings.  Since then I’ve wanted to use it again in a recipe so I decided to incorporate it into a rub.  I made this a couple of times and tested it out on some coworkers and got some really good reviews so I decided to post it since Mike and Andy liked it so much. So here are Asian Baby Back Ribs.

No amounts.  I’ll explain that part of the recipe in a minute. 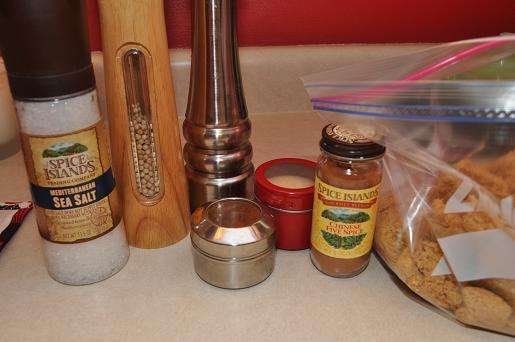 The rub is as simple as it is good because the Chinese Five Spice has such great ingredients.  It contains cinnamon, anise, cloves, fennel and pepper: 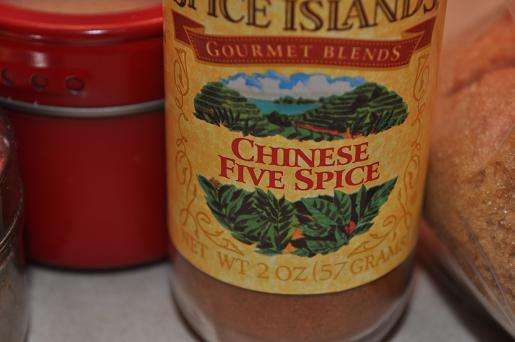 Combine equal parts brown sugar, granulated garlic and the Five Spice plus a half part of the paprika.  About two teaspoons of the first three ingredients (and one of the paprika) is all you need for one slab of ribs: 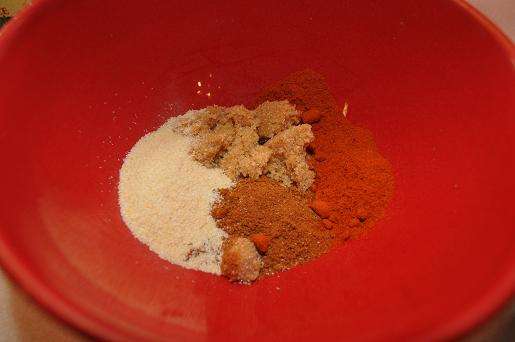 Prior to grilling, I coated each side of the ribs with coarse salt and freshly ground black and white pepper before I liberally applied the rub.  Why two kinds of pepper?  Because each hits different parts of the tongue so it adds a little depth of flavor.  Adding white pepper is completely optional.  Also, apply the salt, pepper and rub bone side first so that when you flip the ribs over to do the other side, the rub stays on the meat rather than the cutting board thanks to the arc of the bones that elevate the meat off the cutting surface.  Do the meat side first and when you flip them over, a lot of the rub will stick to the cutting board.

I set the Grill Manufacturer That Shall Not Be Named up for two zone grilling which means coals and smoke wood on the left and nothing but the meat on the right: 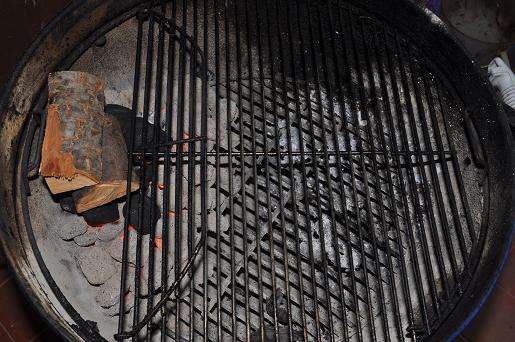 What type of wood is that?  The wood that I felt perfectly complemented the Asian theme — plum: 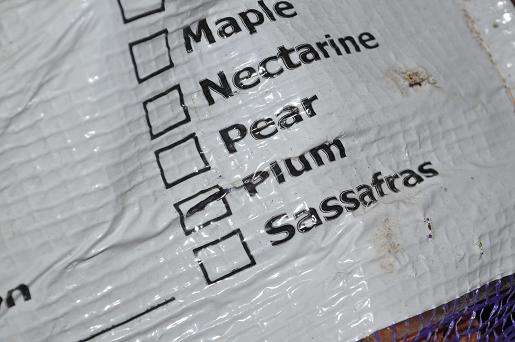 Seemed appropriate to me when I saw the plum at Arnold Stove and Fire.

The coals are on the left so my Asian baby back ribs go on the right side of the grill, bone side down to make sure the rub stays on the ribs rather than stick to the grill grate: 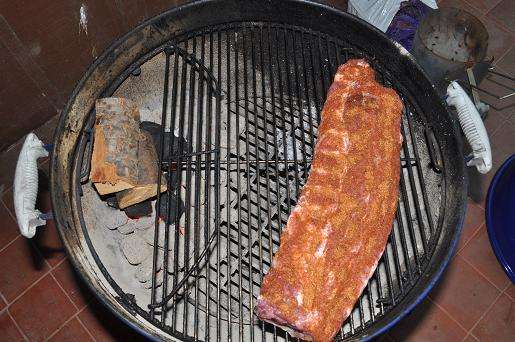 I know it doesn’t look like much of a fire, but the flash washes out the red coals so here’s a pic without the flash so you can see that the left side is indeed red hot: 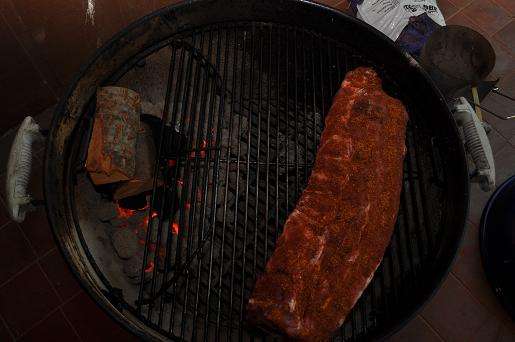 You’ll also notice that the end of the Asian baby back ribs closest to me in the picture is a little closer to the fire than the upper end: 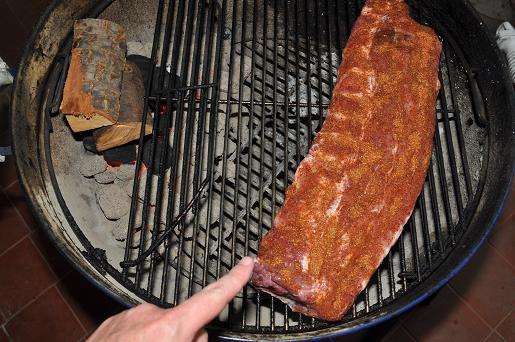 That’s because that end is much thicker than the other end so I want it closest to the heat, but not too close to lose the indirect effect I’m going for.

You’ll also notice that the grill grate is lifted up over the coals and the wood.  That’s so I can add more charcoal and smoke wood easily while grilling should either run low.  Now it’s time to put the lid on on the grill.  Make sure to position the top vent right over the meat so the smoke has to travel over the meat to get out of the cooking chamber: 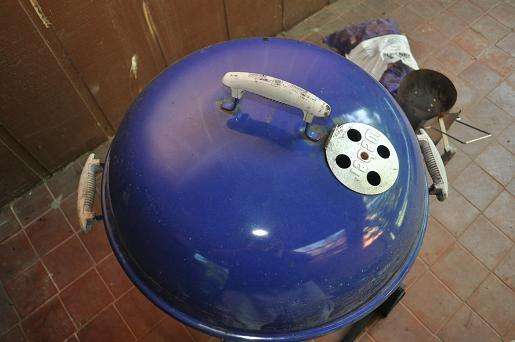 I’ll be using the high heat method here which is between 300-325 degrees.  I realize that doesn’t sound very high.  Sounds more like medium, but so many people go with 200-225 for 4-5 hours that this is high by comparison.  They call it the High Heat method because medium heat method doesn’t sound as good. This method gives me a great smoke ring and gets the ribs done to perfection in two hours.  Now for me, perfection is not fall off the bone ribs.  They will be tender and juicy but not fall off the bone.

Here are the Asian baby back ribs at the 1 hour mark: 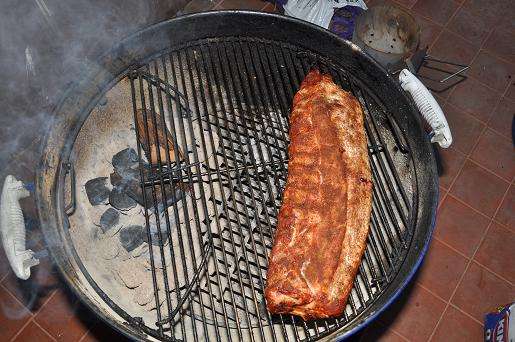 Since I don’t want the bottom left of the slab of the ribs to burn, I rotated them on the grill so the bottom right was closest and added some stuffed tomatoes in tin foil nests to the grill. You can find that recipe and write up here: 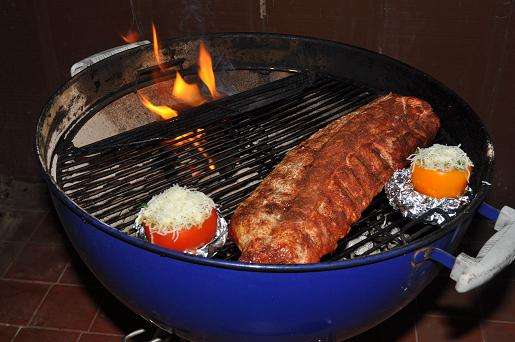 Here are the grilled ribs at the two hour mark and ready to come off the grill:

How do I know their done?  A couple of ways.  For one, I’ve done this method hundreds of times.  The other way I know is the grilled ribs told me.  They told me when the bones started showing themselves: 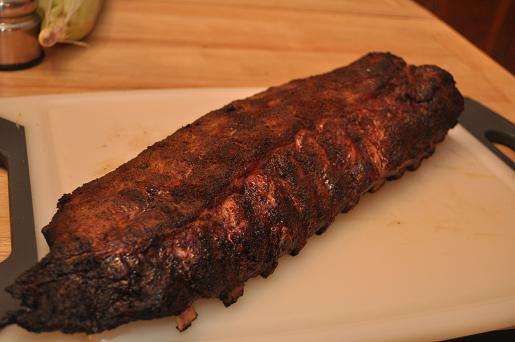 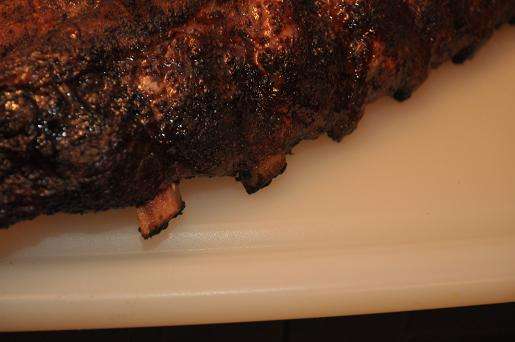 But how do the grilled ribs look on the inside: 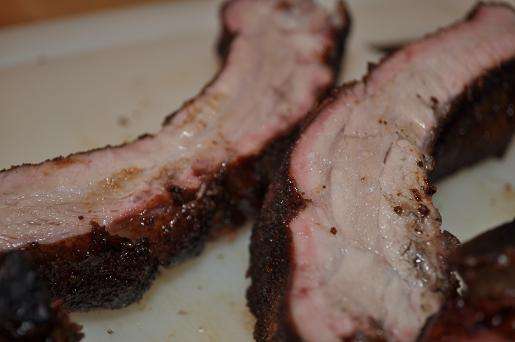 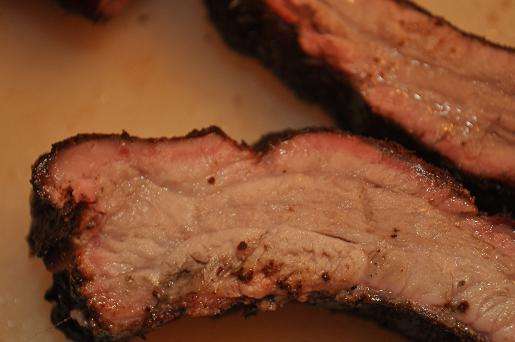 Good flavor in the rub? Check.

Would I do them again? Abso-checkin-lutely.

Now comes the question about the plum wood.  How was it? It’s a mild wood but not as mild as apple but doesn’t quite have the bite like cherry.  I would place it pretty close to peach which is one of my favorites.

If you have any questions about this Asian baby back ribs recipe, feel free to leave them below or shoot me an email.

If you dig an asian twist, check out these Asian Glazed Ribs I did more recently. 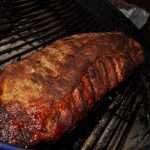 No amounts. See the Instructions 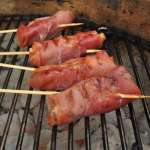 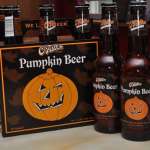 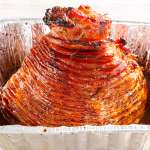 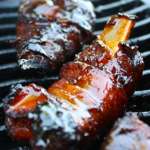 I am still really new to grilling ribs and have failed at it a couple times so this may seem like a stupid question but, it doesn’t look like you flip the ribs at all you just kept them bone side down throughout the process…is this correct?

Yes, Zach, I rarely move ribs when I grill them. Wether indirect on a kettle like these or over a place setter on a Kamado style grill. And don’t sweat it. The worst part about making mistakes is the only way to counter that is to practice which means more time on the grill!!!

Scott,
Have them a try and they were fantastic! I am going to do them again this weekend bad I was wondering: A) if you thought a brine would be good for this type of rib. And b) what type would you use?
Thanks for the help!!
Zach

We’re big believers in brining ribs. My go to brine is apple cider (or apple juice), garlic, black and white pepper and salt. The ratio is 1 cup of salt per gallon of water so if you only need a quart of liquid to submerge the ribs, then you need a quarter cup of salt. I generally brine over night, but if you can only do a couple hours, up the salt a little…